Obama and Mccain Get Competition From Mario Party

Now that we’re down to just two leading party candidates for the 2008 U.S. presidential election, it looks like a couple of new upstarts have tossed their brightly colored plumbers’ hats into the ring. 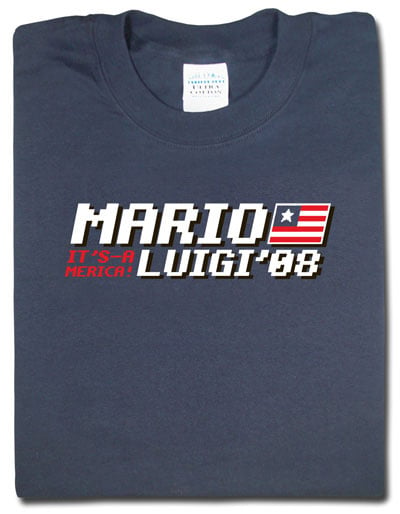 I don’t know about you guys, but I’m definitely voting for the Mario/Luigi ’08 ticket. I’m not sure what their exact platform is, but I’m guessing it involves using mushrooms to solve the nation’s health care crisis, and collecting lots of gold coins to straighten out the budget deficit. Born in Japan, but raised as Italians, I’m not sure that they’d pass the U.S. citizenship requirements, but isn’t stopping them from running with the catchy campaign slogan “It’s-A-merica!”

Show your support for the Mario Party ticket by heading on over to ThinkGeek and picking up one of these festive campaign t-shirts. Given the millions of games these guys have sold over the years, they probably would have a good chance of winning if they actually did run.