Got a couple of spare Compact Flash memory cards lying around? Why not turn them into a high-speed, redundant drive array? With this new drive module, you can create your own solid-stated RAID array in seconds. 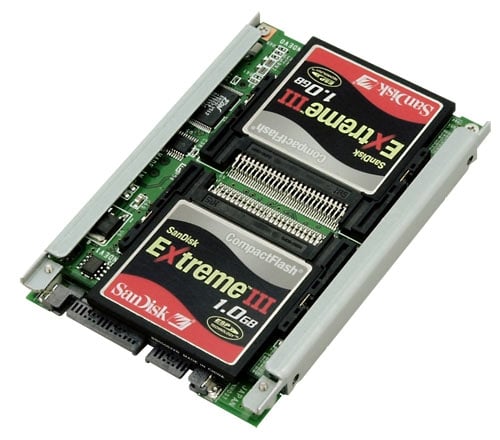 Simply plug in up to three Compact Flash cards, and this nifty device will set up a RAID array between them, which you can connect to your computer’s high-speed SATA port. With three cards in place, you’ll have a fully-redundant RAID 5 array. But if you’re just looking for raw speed and don’t care too much about the risk of data loss, you can just run a smoking-fast RAID 0 configuration with as few as two drives. As the system will only run at the speed of the slowest installed memory card, I’d recommend that you use the same type of card for all slots.

With more acronyms in its name than should be allowed in a single product, the DIY SSD SATA array is available from GeekStuff4U for about $190 USD.