Ampbot: Like a Robot on a Segway With a Boom Box

Hot off the presses is the A.M.P.Bot, a unique roller-bot that moves around using a gyroscopic balancing system that works much like the Segway Personal Transporter. 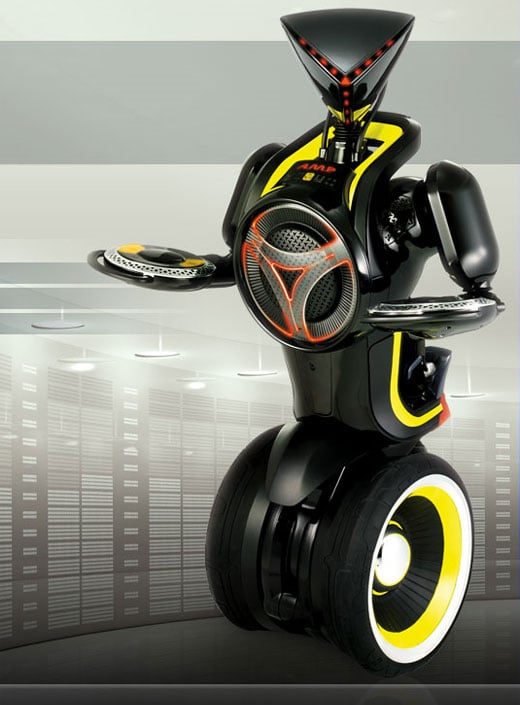 A.M.P. stands for “Automated Musical Personality”. That’s because the wheeled robot can follow you around and play your tunes wherever you go. When set to tracking mode, the robot will even keep tabs on your location and keep the speakers facing you at all times. The self-balancing 29-inch tall robot rolls along courtesy of a piezoelectronic gyroscope which keeps it from tipping over on its narrow 2-wheel base. There’s also an obstacle avoidance system to keep A.M.P. from bumping into walls or tumbling down the stairs.

As the ‘bot moves around the room, it’ll “dance” (more like wobble) to the tunes on your connected MP3 player, keeping with the beat – with a bunch of synchronized LEDs blinking all the while. A built in 12-watt amp and a set of three speakers pump out the music. You’ll be able to control the audio mix and a variety of sound effects by interacting with A.M.P.bot’s touch-sensitive mixing pad “hands”.

The A.M.P.Bot will be coming to the States courtesy of Hasbro’s Tiger Electronics this October (it’s available from SegaToys in Japan). Expect it to retail for about $500.