Before all you budding nuclear physicists attempt to correct me, I know this isn’t truly a Geiger Counter. It’s actually one of those Cold-War era Ion Chamber radiation detectors. But that’s not what most of us think, so I’ll stick with the more familiar Geiger name. Regardless, this computer casemod won’t actually detect radioactivity, but the nuke gauge will kick in when you power on the PC with a flip of the original sensitivity dial. 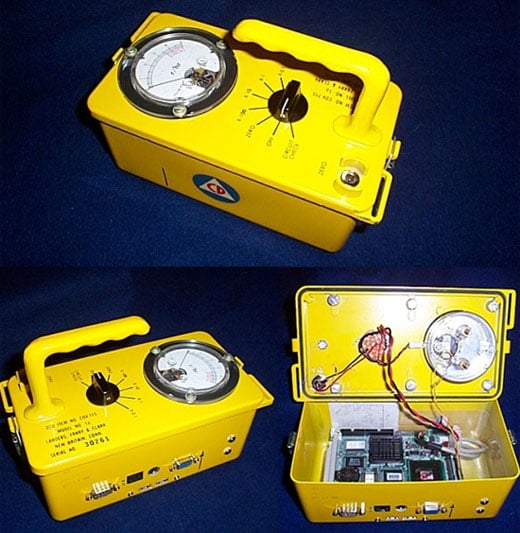 Because of the cramped quarters inside the box, the Russian-built Fallout Terminal [UPDATE: Turns out that it’s actually the brainchild of a guy going by the name Widefault — see comment #2 below] Civil Defense computer isn’t very powerful — running an anemic 300 MHz CPU, 256MB of RAM and a 4GB Compact Flash card for storage. Heck, it probably isn’t even powerful enough to play the original Fallout or Half-Life. But with the proper Atari 800 emulator installed, it might be able to play a game of SCRAM (Remember gaming genius Chris Crawford? Ah, memories.)