For the past couple of days, I’ve been holed up in a tiny country cottage with spotty, catch-as-you-can WiFi access. More often than not, I had no connection, and I started to think that figured the wireless router was intentionally messing with my head. Perhaps it was this plush evil wireless router that was disrupting my connectivity. 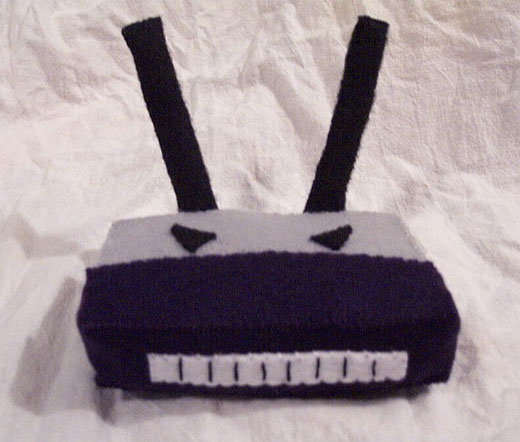 Sewn from felt and embroidery thread by Flickr contributor craftytails, it’s not clear if it’s a Linksys, Netgear or some other evil router lurking beneath the angry (but soft) exterior, but given its fabric construction, it’s unlikely that it’ll ever connect to the Internet at anything faster than 802.11b speeds.

Then again, my experiences this weekend prove that just because your wireless router is packed with actual electronics doesn’t mean that it’ll actually work.

[via Craft: – thanks for the tip RoadsideScholar!]