Now don’t get me wrong. Other than the stupid analog controller, I really like the industrial design of the Sony PSP. But I’m not sure it warrants other gadget manufacturers going out and making their devices look just like it. Take, for example, this Maxx Digital portable DVD player, which bears more than a passing resemblance to an oversize PSP. 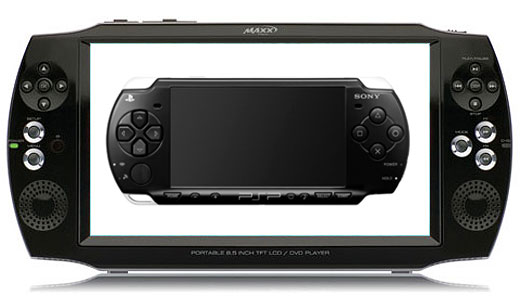 Even though Maxx doesn’t win any awards for originality, the PDV-8500BLK does look like a pretty capable portable DVD player. The player features a nice 8.5-inch LCD widescreen, and can play videos in DVD, DVD+/-R, DVD+/-RW, CD, CD-R/RW, VCD and SVCD formats. There’s also support for JPEG, MP3 and MPEG4 files via a built-in SD, MMS/MS card reader slot. About the only thing it won’t play is video games or UMD discs — but you’ve got a PSP for that already, right?

So if you think the PSP’s screen is just too small to watch movies on, you can supersize with one of these players for about $120 over on Amazon.