We live in an age in which getting up to change the channel is unheard of. So at least if you are gonna do it from the comfort of your lounge chair, you can do it with style. This wacky retro ray-gun remote control is sure to draw stares whenever you aim it at the TV. 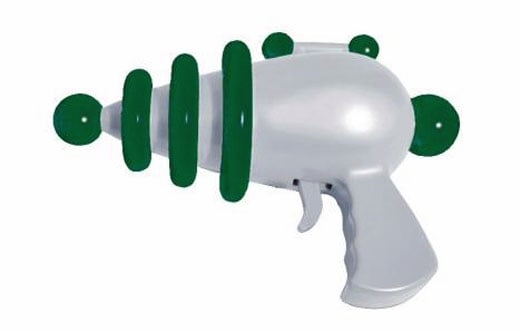 Looking sort of like something that Marvin the Martian might have used to destroy the Earth with, the ray-gun remote control can only change channels, and (unfortunately) won’t blow anything to smithereens. Just pull the trigger, and it’ll make some sort of fun sci-fi sound effects while it zaps Dr. Phil from your screen and replaces him with the only slightly less annoying Rachel Ray.

You’ll have to wait a little while to get your hands on one of these though, as they’re not coming out until this August. In the mean time, you can pre-order from UK gadget shop Play.com for £8.99 (appx. $18 USD).