Orbitwheels Turn Rollerblades on Their Side

In the beginning, there was the roller skate, then came the skate board and later the Rollerblade. So what’s the next conveyance that we’ll be strapping to our feet to roll around the street? 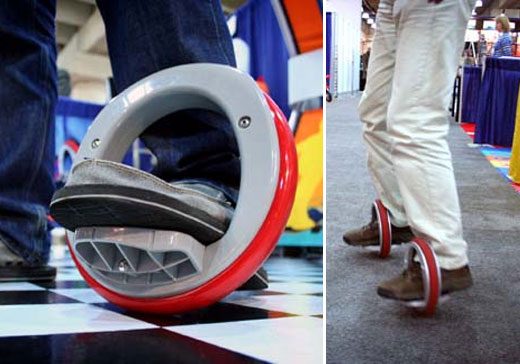 Orbitwheels move sort of like inline skates, but a wheel rotates around your feet, instead of under them. The large donut-shaped wheel whirls around sideways, letting you do all sorts of crazy tricks and spins with relative ease.

Unlike Rollerblades or skates, you just step into the Orbitwheels, so you don’t need to tie any laces or fasten any buckles to get going. Of course with any sporting good that has you hurdling down the sidewalk willy-nilly, protective pads and a helmet are a probably a good idea unless you plan on breaking some bones.

Orbitwheels are available for pre-order now from NewDaVincis for $159.99 a pair.