Shower Radio Disguised as a Shampoo Bottle: Why?

This isn’t exactly high-tech, but it’s a strange enough gadget that I wanted to share it. It’s a waterproof radio for your shower that’s disguised as a shampoo bottle. 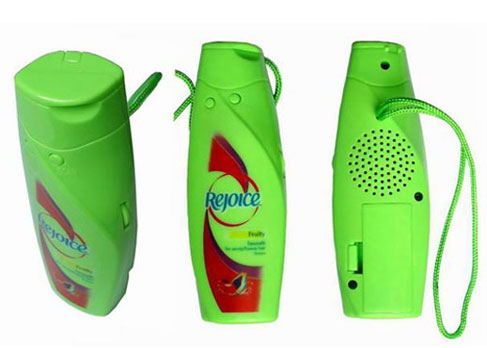 Sooo… what’s the rationale behind this product? The only thing I can think of is that it’s to prevent theft of your super awesome shower radio. But that doesn’t make sense because this thing looks really cheap. I mean, I have single bottles of real shampoo that probably cost more than a whole case of these things. Whatever the reason, this wins the prize for being the most pointless gadget I’ve come across lately. (OK, so realistically, maybe it’s a tie with the s’mores maker, but it’s definitely up there.)

The stats: it takes 3 AAA batteries and adds absolutely no value to your life or decor. It looks like it’s a wholesale item, so if you’d like to stock these in your (obviously somewhat craptastic) shop check out the deets on Alibaba.