I have a dream. And that dream is that one day a single portable gaming console can play all of my favorite arcade classics (on a decent sized screen). Thanks to a modder going by the name “Bacteria”, that day is today. 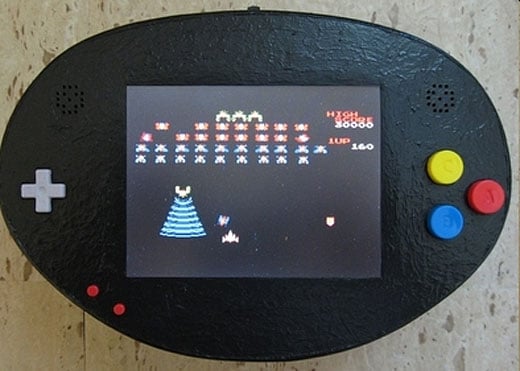 Bacteria’s Mini Multi Arcade system mashes up a bunch of those TV plug ‘n play game systems and crams them all into interchangeable cartridges (OK, some of these are more like small bricks) that can be plugged into a single portable.

Instead of the crummy “joystick” that most of those Plug ‘N Play systems use, Bacteria replaced those with a far more usable D-pad controller instead. All games are played on a nice 5.4″ diagonal LCD screen, and the system can play for up to 4.5 hours at a time, thanks to a pair of 2000mA heavy duty Li-ion batteries. And in case Bacteria wants to play the games on a bigger screen, there’s video and audio outputs for connecting to a TV.

The system currently plays a number of classic arcade games ranging from Pac-Man to Galaxian to Dig Dug to Space Invaders and QIX. It can also play a ton of NES games and will soon be able to handle GBA cartridges as well. So far Bacteria has made up about 15 or 20 of his unique multi-game cartridges, and plans on making more real soon.

While I know you could probably achieve a similar result with a software emulator, there’s something innately satisfying about cramming all this physical hardware together to make something that actually works.