LEGO Skateboard for Some Bricktacular Shredding

LEGO artist extraordinaire Nathan Sawaya’s recent project is this super sweet LEGO skateboard. It’s actual size, and based on the close-up picture of the wheels I’m going to go out on a limb and say it’s not actually ride-able. 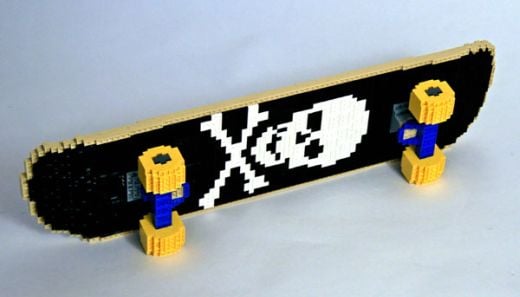 According to the artist, his inspiration came about thusly: “My friend recently bought a new deck and it only took me a few seconds of staring at it before I realized what my next project would be. I didn’t want to imitate any particular design, so I came up with my own. I call it my NATEboard. Because my name is Nate. And it sounds like skateboard. And I’m lonely.”

It seems hard to believe that a guy with such insane LEGO talents could ever be lonely. Seriously, there must be tons of girls who would love to meet a bricksmith of this caliber, right?

You can see more of Nate’s Lego projects at The Art of the Brick.