Ah, another ho-hum day on the job. You know, you get up, you put on your white battle armor, load up your E-11 battle rifle, and head out to work. But before you run out the door, don’t forget your lunchbox! 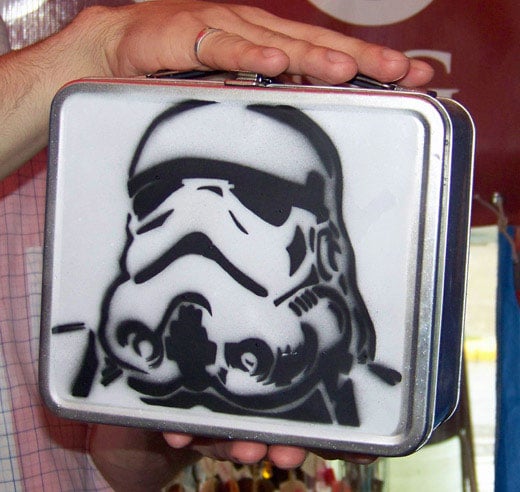 Whether you’re performing services for the Republic or Imperial Army, you need to be sure to eat well every day. That’s why this Stormtrooper lunchbox is perfect for keeping your lunch meats and juice box safe from blaster pistol fire.

I actually stumbled onto this hand-stenciled Stormtrooper metal lunchbox ($20 / $27 with Thermos) over at last weekend’s Renegade Craft Fair here in Chicago. I can’t tell you too much about it, other than the fact that it’s awesome, and made by some guys named Jed and Jason from an outfit known as Urban Retro Styling. It looks like their website is still in the “under construction” phase right now, so your best bet is to drop Jed a message, and I’m sure he’d be happy to sell you one.