8-bit and 16-bit worlds collide in this split-personality console which can play games from both the Nintendo NES and the SEGA Genesis consoles. 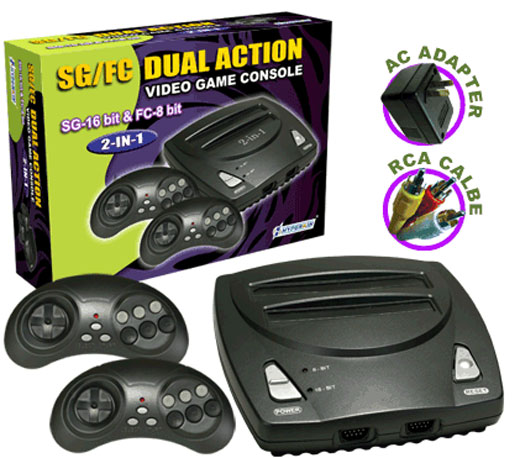 The Hyperkin Dual Action SG/FC (also sold under the Yobo brand) has two cartridge slots, and can play original carts from both of these classic systems. Just flip the switch between NES and Genesis modes, and you’ll be playing Mario and Sonic on the same console.

The SG/FC connects to your TV via an RCA composite video output, and offers stereo audio output (presumably for 16-bit games). Yobo also includes a pair of joypads in the box, so you’ll have everything you need to play all your favorites right out of the box.

With a little luck, you can find these consoles over on eBay for around $35 to $45 bucks.

[If you can hold out for a while, you might want to wait for Yobo’s upcoming FC3 Plus systems, which will play NES, SNES and Genesis games with a triple-slot configuration.]