Those of us living in the Midwest know all too well that Winter is about to strangle us with its icy grip. And while 6 months of freezing cold weather can really suck the life out of you, there is a happy side-effect of the season. Snow – lots and lots of snow. So what better way to put all that fluffy white stuff to use but to nail your friends with some major snowballs. 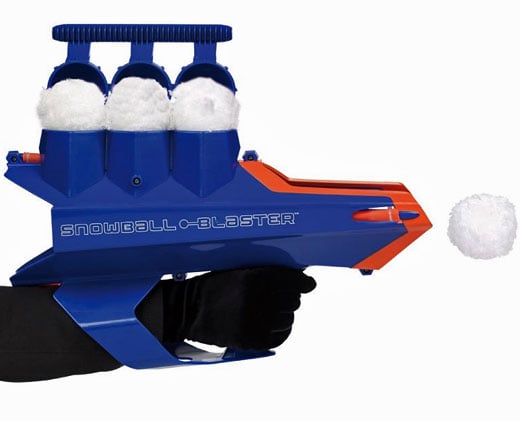 I’ve never been very good at making decent snowballs, but with this heavy-duty mechanical Snowball Blaster, pretty much anyone can become an expert snowball marksman.

Just pack your snow into the three casting chambers, and it’ll roll three perfectly round snowballs. When you’re ready to take aim, just load one of your spherical snowballs into the muzzle, pull back the launcher mechanism, and SPLAT! Your victim is covered in snow. An elastic slingshot mechanism means that you’ll be able to fire off another snowball blast in just seconds, just in case one wasn’t enough.

The $29.95 Snowball Blaster should ship just in time for Christmas over at Hammacher Schlemmer