A few weeks back, I came across these cool looking Nanovision Mimo mini computer displays. At the time, there was no way to buy these minuscule monitors outside of Korea. Now, for the first time, you can buy these displays in North America. And thanks to the guys over at The Gadgeteers, I’ve now had a chance to put one of these little LCD screens through its paces. 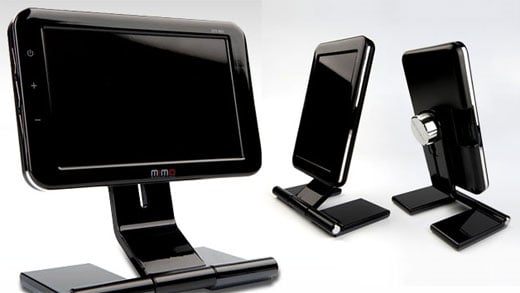 While Nanovision is making several models of these diminutive displays, the one I got to try out was the UM-710, which is the most basic of the three models available stateside. While the UM-710 ($129 USD) only works as a secondary monitor, the UM-730 ($169 USD) adds a webcam and microphone, and the UM-740 ($199 USD) ups the ante by adding a touchscreen. 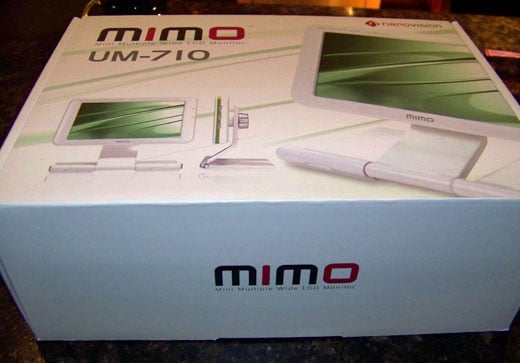 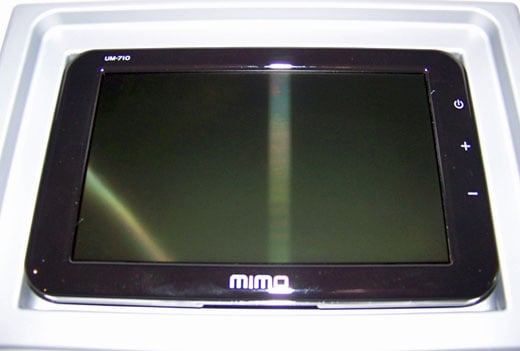 Setup of the Nanovision screen couldn’t be much easier. Just attach the display to the included stand with a simple turn of the shiny chrome thumbscrew, install the included driver software, and plug in the included USB cable between the display and your computer (the display comes with a dual USB connector in case one port doesn’t provide sufficient power). Thanks to the USB 2.0-based connection, you can connect multiple monitors without need for an additional video card. Keep in mind that each display you add will eat up somewhere around 50 to 75 MB of your system memory. 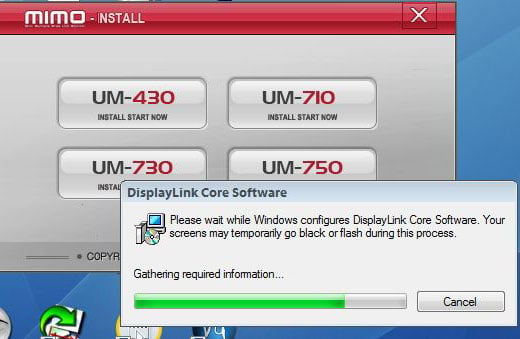 The drivers I tested were a pre-release of the English language version of Nanovisions DisplayLink Core software. I only got to test the Windows version, but OS X support is also supposed to be included. The software installed easily and without much incident on my Dell Latitude laptop, running Windows Vista Pro. The only challenge with the driver was that after installation, it messed with the resolution of my main display, and I had to reboot. After the reboot, all went smoothly, and the mini Mimo display started to work as a mirror of my main screen. A simple tick of the “Extend” option on the included task bar application turned the external display into its own unique desktop. You can decide whether the screen is extended from the left, right, top or bottom of your primary display. For more precision, you can tweak this using the Windows standard multiple monitor properties controls. 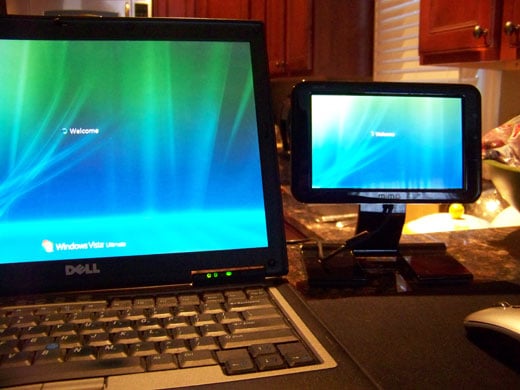 When I first connected the display, I was immediately impressed by the sharpness of the 7-inch 800×480 widescreen display, which packs a singnificantly higher pixel density than typical PC monitors. There was a little bit of flicker when I first plugged in the display, but bumping up the backlight control on the side of the display by one or two notches immediately resolved this issue. The photo below doesn’t nearly do justice to the sharp focus of the diminutive screen. 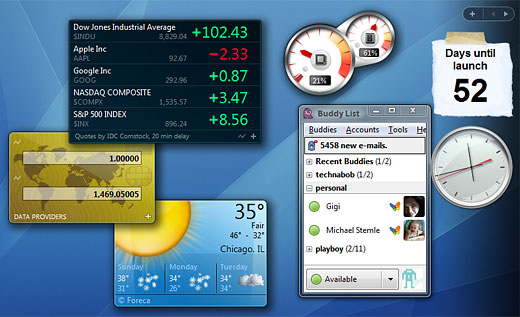 The Mimo displays all feature a pivot feature, which lets you rotate the monitor from landscape to portrait mode with just a simple twist of your wrist. It took me a few minutes to figure out that the display doesn’t auto-sense the pivot. Even though the box says “auto-pivot”, it turns out that you do need to go into the task bar app and set the rotation manually. It’s unclear to me if there is or isn’t a motion sensor inside the screen and if this is a software bug or just bad labeling on the box. Either way, the display worked quite well in either orientation once I figured this out. 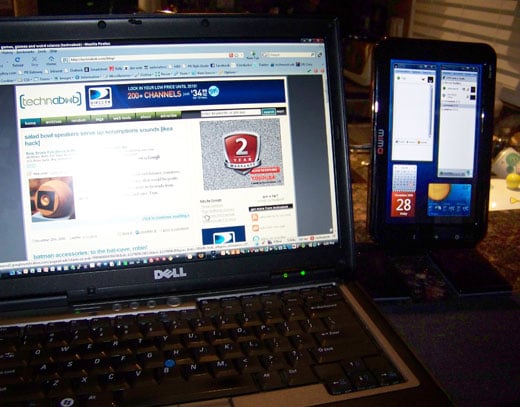 I did find that off-axis viewing angles of the screen were quite a bit better in landscape mode than portrait mode, however, so you’ll need to make sure the display is oriented properly if you’re operating in portrait mode for optimal brightness. After playing with both modes, I decided to stick with landscape since I could watch videos or open web pages most efficiently on the screen in that orientation. 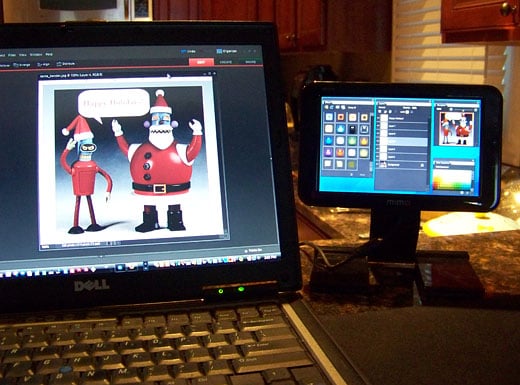 A couple of minor things to be aware of with the Mimo. First off, I couldn’t find a way to apply color correction to make the display match my primary screen. While there might be a way to do this with Windows color profiles, I couldn’t figure out a way to make that work. Nanovision should consider including color correction software to make this possible. One other minor issue is the stand. The arm only has a single pivot point, which somewhat limits the angles you can set the display to. Also, if you swing the arm back too far, it’s very top-heavy and can easily tip over. That said, with proper adjustment of the arm, it’s not a big deal. There’s also no cord-control for the small USB cable, so it does interfere a bit with the sleek lines of the monitor. 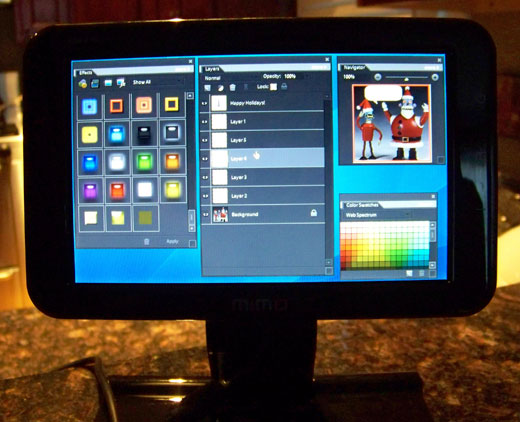 At first, I wondered how much I’d use a display like this. But after just a few hours with the Mimo, I was hooked. I pawned off all of my Windows Sidebar gadgets, instant messenger windows, and used the display as a holding place for extraneous palettes in Photoshop whenever I worked on larger images. The mini-screen is exceptionally sharp, so it’s even possible to read entire web pages on the display while working on other documents on your larger screen. 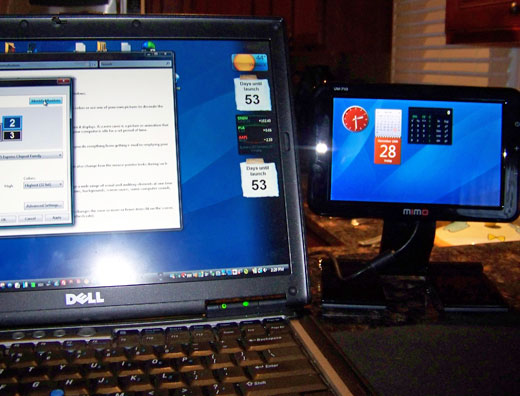 Overall, I was really impressed with this pint-size monitor. It took just a couple of minutes to get set up, and it looks really great (especially in landscape mode). While you probably wouldn’t trust the color accuracy of the display for image retouching work, it’s more than capable of handling the secondary display usage that it was designed for. And while I wondered about USB’s ability to handle fast-motion data, I managed to play back full-screen video clips on the display with not the slightest stutter. 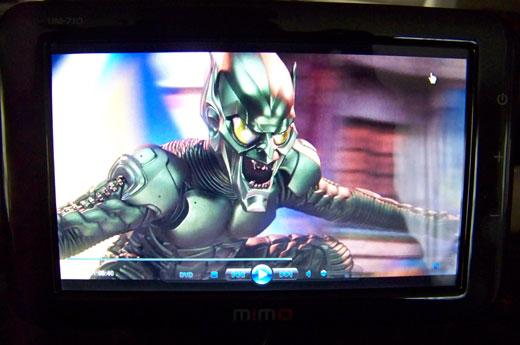 If you’ve ever find yourself running out of space on your computer screen, you need one of these. If you just want a cool toy for your desktop, you need one too. I’m already feeling like I can’t live without one, and want to order the touchscreen UM-740 as soon as its available. It’s already made me more productive, and it just looks really damned cool sitting alongside my other monitor. To get your hands on one, head on over to The Gadgeteers, who have worked hard to bring these slick little displays to North America for all of us to enjoy.