I remember back in high school, one of my classmates had this gigantic wrist watch that was also a universal remote. He had loads of fun using it whenever we watched a movie in class (Kramer vs. Kramer, Anna to the infinite power, a woman giving birth, etc). I think he’s dead now. I’m kidding. He never graduated. Okay, I don’t know what happened to him, but I do know that thanks to the $9 Micro Spy Remote, we can all exercise the exact same stupid, juvenile sense of humor. 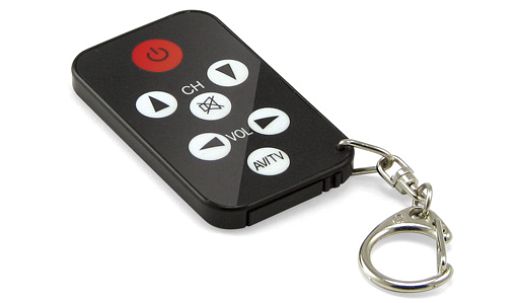 Your friend is prepped for the AC Milan – Juventus match, wearing his del Piero boxers, hot popcorn and San Mig Super Dry at the ready. Just when the game kicks off, the TV shuts down! He turns it back on but it’s suddenly muted! One second Nedved’s lining up for a blaster, the next it’s Eddie Murphy in Norbit!

Or you pass by an appliance shop. You’re at the pub. Or your little sister’s watching Bob the Builder. You get the idea. Just don’t mistake it for your car’s remote lock, because that would be… that would be awesome. Also, MANNY! MANNY! MANNY!