Here’s one of those things that makes me go, “why not?”: Building Brick iPod Speakers. On one hand, Lego and iPod barely have anything to do with each other. On the other hand, why not? 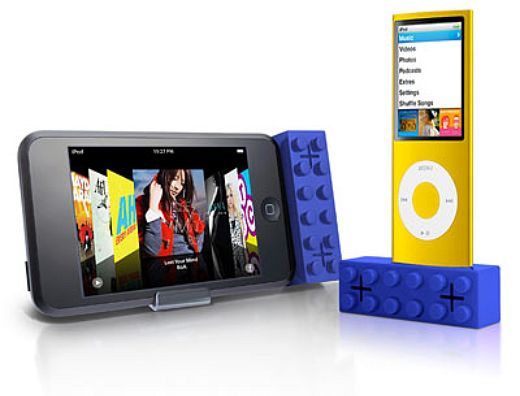 The Building Brick iPod Speakers, aka iPod Brick, aka iBlock, but not aka Lego iPod speakers,  works with 3rd-5th gen iPods, 1st-3rd gen iPod Nanos and on the iPod touch. I swear I had to retype those iStuff so many times. cOnfusing aS hEll. I mean, they’re not made by aPple.

The center bottom pegs act as nifty volume up and volume down buttons. The speakers are also said to have an “Active Bass System”. Which just might be a fancy way of saying that it has bass. Tinny, but it’s there. It sells for $20 at Think Geek, and no it doesn’t fit together with ordinary Lego blocks.  Also, I don’t know if Think Geek only has the blue ones, because for UK residents there are no blue blocks but there are red, white, and black blocks over at iWant One of Those, and they’re $2 cheaper too.

[via I Want One of Those and Think Geek]