I’m happy to report that Domo-kun is adorable anywhere… even on the hulking side of an Xbox 360. In fact, the strange creature himself brings a beautiful color scheme to the console, and the result is a chocolaty confection of cuteness that suits the 360 very well. 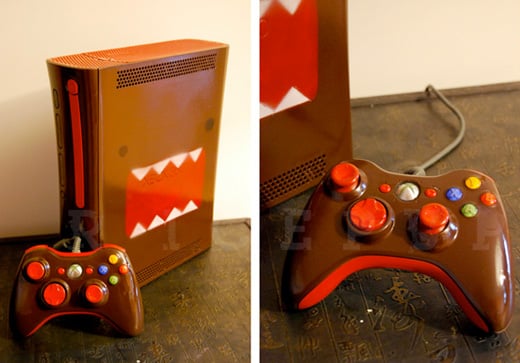 DeviantARTist Ricepuppet slicked up this Xbox 360, he says, as a gift for his sister-in-law. Clearly, she has good taste, but that unfortunately means the mod is not for sale. Ricepuppet does custom paint jobs, however, and you can see other examples of his work (and rates) here.

If you’ve read all this and are wondering just what the heck Domo is, this video won’t help much, but it’s cute all the same.

Yes, he was hatched from an egg, has big teeth, and makes for an excellent Xbox 360 mod. That’s all you really need to know.