Xbox 360 Room has Me Slightly Green With Envy

When I get my own house, I’d like to have a couple of game rooms in it. A game room with a projector for playing PES or Rock Band or NBA 2k15, and another smaller game room for playing RPGs. Dream, dream, dreee-eam, dreee-ee-eeam. That’s why I envy Youtube user Tchazzar, because he was able to set up his own Xbox 360 game room, complete with logos on the walls, a mini-fridge, and dimmable green LED lights. 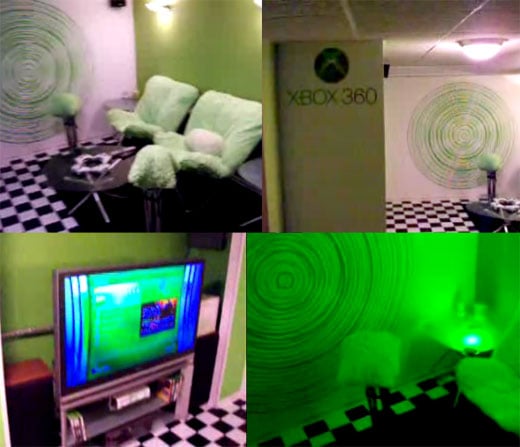 If you listen closely to Tchazzar, you’ll realize, as I did, that he sounds a hell of a lot like Adam Sandler. “Heeerre we have the shpeakersss, shpeaker up tooooop,uuuhh, more shpeakers, surround speakers…”

That was pointless and not helpful at all. But seriously: listen to his voice. Adam Tchazzar. Tchazzar Sandler.

Only trouble is, gee whiz, I’m dreamin’ my life away…