Ok, how’s this for a concept? Take two moody lovers on a park bench. Put them inside your iPhone or iPod Touch. Shake them vigorously. Watch the sparks fly. 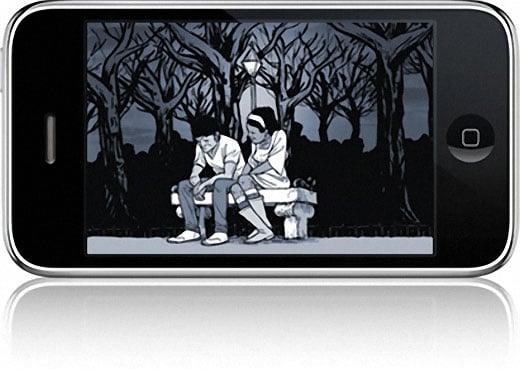 Yep, that’s the idea behind interactive artist Eric Loyer’s new iPhone app, Ruben & Lullaby. By jostling your iPhone, you’ll make the lovers angry. Give them a little stroke, and they’ll calm down and maybe even shed a tear.

Your motions and gestures control the destiny of the young couple, and each action produces a real-time reaction from the characters in your little mobile drama. It’s sort of like a Tamagotchi for adults, with a couple, on a park bench.

Ruben & Lullaby is the first of Loyer’s Opertoon series, which envisions animated stories that can be played like a musical instrument. While the concept of two fighting lovers seems a bit odd, the interactive component could be pretty cool for other animated stories.

It’s available now over at the iTunes App Store.