So now that you’ve got your brand new super-deluxe widescreen flat screen television, isn’t it time for an upgrade? If you’re like me, you know the minute you buy anything that runs on electricity, you’re cursed with its immediate obsolescence. So it is with great pleasure that I present the latest in drool-worthy future tech, the ULTRA-widescreen television. 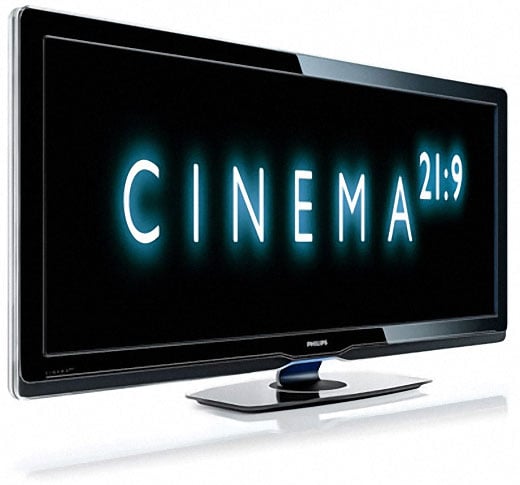 Conventional 16:9 HDTV sets are for wussies. At least that’s what Philips is saying with their upcoming Cinema LCD televisions, which support a truly cinematic 21:9 viewing aspect ratio.

You see, big blockbuster movies are often shot in 70-millimeter or Cinemascope formats are actually 2.20:1 or 2:35:1 ratios, so end up showing with black bars on top and bottom on even the best 16:9 displays. With a 21:9 ratio, you’re at 2.33:1, which means you’ll have virtually no black bars when watching films shot in these formats. 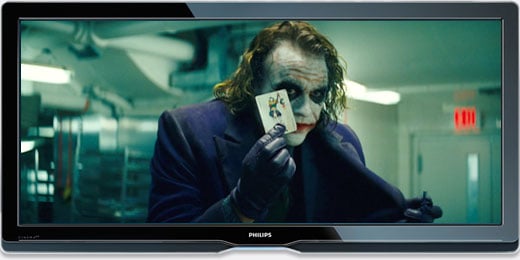 Now keep in mind that the 56″ Philips Cinema LCD screen will have to stretch your precious HD and Blu-Ray signals to fill the screen so the former black bars will result in some wasted resolution. But what good were all of those pixels doing as black dots anyhow?

Of course, watching 4:3 programs on this bad boy will give you the fattest black bars you’ve ever seen, but 4:3 is so last decade anyhow. The Cinema display can also stretch 16:9 content to fill the 21:9 screen, but if you’re like me, you hate stretchy heads, and would rather put up with the black bars on the sides while viewing regular HD content.

Philips also says the Cinema series will include their colorful RGB LED Ambilight backlight technology, which should make watching movies on this beast a truly immersive experience. Expect the Cinema 21:9 to hit stores this spring. Pricing and release information should be available sometime in February.