iSneaky:  The White 13-inch MacBook has been upgraded, but for some unfathomable reason Apple’s not flaunting it. It absolutely definitely surely can’t be because of the newer, more expensive Aluminum MacBooks. 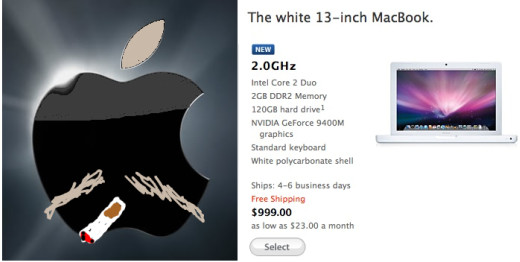 The most obvious upgrade is the GPU, which is now an NVIDIA GeForce 9400M (256MB), quite a substantial leap from the Intel GMA X3100 (144MB). The standard RAM’s also been upped to 2GB from 1GB, although it’s still DDR2 and not DDR3 like the ones that the Aluminum MacBooks have. If you check out the MacBook’s Wikipedia page, you’ll also see that the Core 2 Duo chip has been updated with a 1066MHz FSB from 800MHz. Bluetooth is now 2.1, and the bundled OS X is now 10.5.6. And it’s still $999 (USD). So if you’ve been holding off on purchasing the $1,299 Aluminum MacBook because of the glossy screen, you now have a matte and cheaper alternative.

My Seashore skills are phenomenal. I’m so proud of myself.