So you’ve just made this awesome version of the classic Dope Wars for the App Store. You’ve worked hard. You’re ready to reap the benefits that come with people paying for your game. But at the last moment, you are denied glory. Apple rejects your game. Drugs are bad, mmkay? At this juncture, you have two obvious options: one,  you go off and do something else, or, if you’ve got moxie, you mockingly reskin the game and try again. If you’re Catamount Software, you succeed. 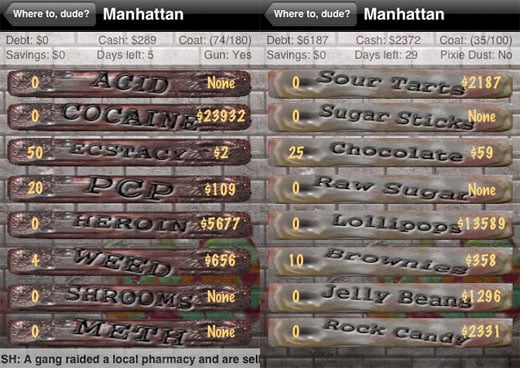 Now, Dope Wars is Candy Wars, and it’s available in the App Store for a mere $0.99. Now, instead of taking on the role of a drug dealer, the player is an illegal candy dealer in a future world that has banned candy in a desperate attempt to combat obesity. Instead of slinging weed, you’re trading in brownies. At Catamount Software, a sense of humor is clearly a job requirement.

They’re making no effort to hide the fact that the games are basically the same–in fact, they’re tracking news of the initial rejection and the new game’s acceptance on their official site.