When I think of Louis Vuitton, I usually think of primping poseurs with puny purse-size pekingese – not potty-mouthed pre-pubescents playing PGR, Portal and Prince of Persia. But the minute I laid eyes on this Xbox 360 window-dressing I had to give it a second thought.

Our pals over at Hawty McBloggy spotted this over-the-top Air Effex custom airbrushed Louis Vuitton-inspired Xbox 360 faceplate over on eBay. It’s perfect if you’re going for that Tracy Jordan on 30 Rock look (or if you’ve just got taste up your arse.) It’s also perfect if you happen to be the guy who owns this car… 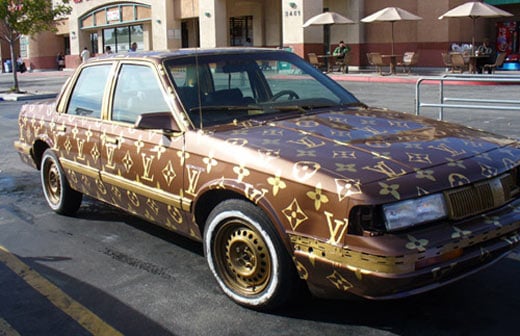 If you’d like to add some bling blech (I swore I’d never use that word) to your Xbox 360, you’d better head on over to eBay and hit Buy It Now for $21 before this LV faceplate gets no bids or Vuitton himself comes back from the grave to sick his lawyers on these guys for using his trademark logo without permission, whichever comes first.