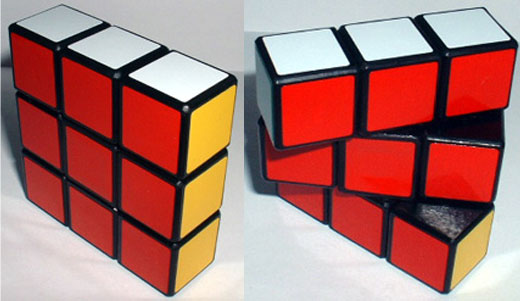 This 3 x 3 x 1 Rubik’s Cube (aka the “Floppy Cube”) is so simple that your cat should be able to solve it – with one paw tied behind its back.

Apparently, this Japanese cube-modder figured out a way to slice up the original cube so a single layer could still pivot and work as a simplified mini-puzzle. In addition to the 1-layer cube, he’s also built a 2-layer version, which is still much easier to solve than the original.

Me, I just used to take all the stickers off and put them on the proper sides. Isn’t that a reasonable solution?