When you want to connect two pieces of land via a bridge, the most efficient, practical and cost-effective bridge would obviously be a straight one. But the architects McDowell+Benedetti opted to create a longer, winding S-shaped pedestrian bridge for the residents of Castleford, a mining town in West Yorkshire, England. 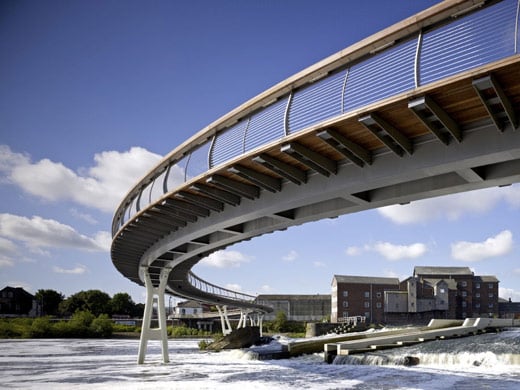 The bridge’s design takes into account the wonderful scenery, which means that instead of merely being something to pass through, people can actually chill out on the bridge and enjoy the view, turning the bridge itself into a destination. To that effect the bridge has curving benches in the middle of the pathway. 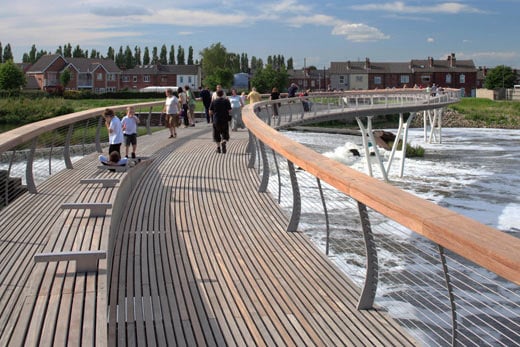 Here’s an excerpt from World Architecture News’ article on the bridge: “The boards run longitudinally along the bridge and over the benches (with anti-slip strips on the edge) and are fitted together by a unique concealed clamped-fixing system, tailor made for the project. This system avoids invasive drilling and minimises disruption to the bridge’s slender deck and streamlined form. It presents the maximum timber surface to walk on, while allowing the wood to expand, contract and weather naturally.” 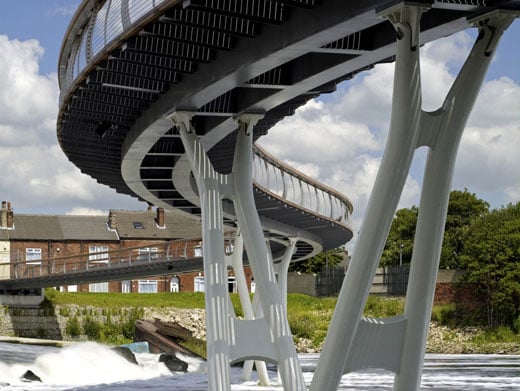 Castleford bridge’s safety features were also integrated without sacrificing aesthetics. Lighting is embedded into the handrails that span the length of the bridge. The supports are curved to discourage stupid people from climbing them, and as you saw above, the benches are divided by arm rests. The arm rests not only create “personal space”, they also deter skaters from grinding on the bench. Castleford Bridge is just one of the structures built in the revitalization of Castleford. One other cool bridge that was made is named Tickle Cock Bridge. I kid you not. The design must be so cool that when you enter the bridge I am going to stop there.

[also via square magazine and dezeen]