We’ve seen it so many times on TV: the handsome hotshot attorney is inside his office, squinting and frowning while massaging his temples to indicate that he’s thinking of a way to win his beautiful client’s case… and heart, of course. Then the secretary comes in and says that he has a call from some guy, perhaps his wife. And then the handsome hotshot attorney says, “Tell her I’m not here/ I’m busy frowning and squinting/ I’m about to commit adultery.” The secretary dutifully obeys, and the call doesn’t get through! Three cheers for secretaries!

Unfortunately, most of us can’t afford secretaries to screen our calls, which means that from time to time we have to deal with prank callers, wrong number callers and *groan* telemarketers. So we pray to the gadget gods for answer. Rise and rejoice, my friends, because trueCall is here. 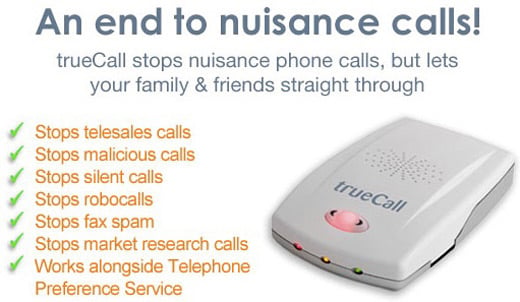 The funny thing about trueCall is that it was actually developed by a couple of lads who used to work in the call center industry. I actually worked as a customer service agent for a few months, and all I can say is that annoying and stupid people can be found on both sides of the line. But anyway, let me just tone down the bright green checkmarks and bright orange superpowers of the trueCall: Look at trueCall as the gadget that it is and not as a magical device and you’ll be fine. In other words, trueCall cannot automatically stop these annoying calls without initial instructions. 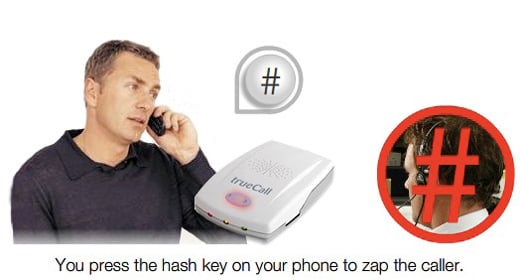 trueCall uses a simple classification for incoming numbers: it has a list of numbers to block called a Zap list, a list of numbers to allow straight through called a Star list, and obviously numbers which have yet to be categorized. And yes, you’ll have to instruct trueCall which numbers to allow and which to block. But wait! There’s more, because all you have to do is press the # key to tell trueCall to zap the number, or press * to star it. You can zap or star incoming calls, calls that you’re already on and even recorded calls, as long as trueCall has that number, i.e. as long as you have caller ID and the caller’s number is recorded.

Since trueCall ltd. isn’t paying me to pimp their gadget I’ll just point you to their website, where there are more details as well as a video which will explain things in depth. If at this point you’re already on your knees with tears streaming down your face, screaming, “Hallelujah!!! This is the Knees of the Bees’ Knees!!! The Suffering stops now! Where do I sign?!”, head on to trueCall ltd.’s shop and buy one for £97.50 ($144 USD).