When you’re playing classic games, nothing beats using the original gamepad. In fact, the good ol’ NES controller is useful for all sorts of classic games, whether or not they were made by Nintendo. It’s comfortable and familiar. So when someone adapts an NES controller for plug-and-play use, I pay attention–particularly if that controller will also double as a USB mouse! 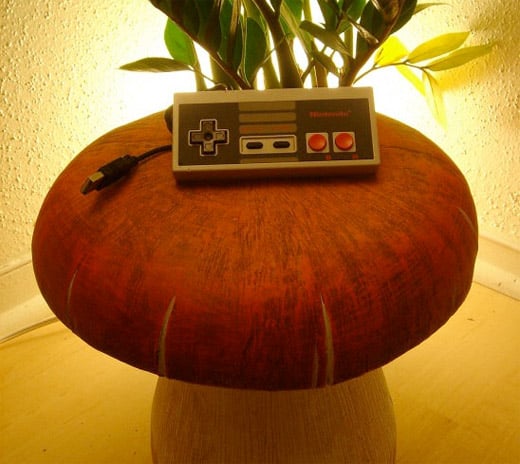 You can plug in this controller and throw down immediately on a variety of operating systems, from Windows Vista and XP to Mac OS X, but unfortunately, the sweet mushroom pillow (lamp? table? decorative stand? other mushroom-shaped object?) is not included in the $35 pricetag.

Don’t think you’ll be sliding this thing around on a mousepad, however; instead, you press A, B, Start, and Select simultaneously to enter “mouse mode,” and from there you can use the d-pad to manipulate the onscreen pointer. The A and B buttons serve as left and right mouse buttons. It’s not perfect, but when you’re playing a game and need to switch for just a second, it’s a convenient feature.