The new LG ARENA touchscreen mobile phone is definitely one to watch for when it’s released later this Spring. The ARENA (also known as the LG-KM900) was launched today at the World Mobile Congress in Barcelona, Spain.

The first thing you notice when you first look at the ARENA is its unique is its 3-D user interface options. Which offers something like an iTunes cover flow on its side. And it doesn’t just work for your media, but for navigating all of your applications. There’s also a 3-D cube layout which lets you find your way around your media and applications by manipulating a 3-dimensional cube. And yes, Virginia, the ARENA offers tactile feedback under your fingertip as you interact with the display.

The ARENA packs a substantial 3-inch touchscreen display running at super-sharp WVGA (800 x 480) resolution. Oh, and did I happen to mention that the ARENA offers Dolby Mobile surround sound? With a screen like that and surround, if you want to watch movies on a mobile device, this could be the one. There’s also a built-in FM transmitter to send your audio to your car or home stereo without wires.

Looking to take some photos or shoot some video? The ARENA offers a 5-megapixel digital camera, which lets you access the type of adjustments that you’d normally only get on a standalone camera. And you can shoot DVD quality video at up to 30FPS. There’s even a manual focus mode, and you can shoot slo-mo video at up to 120FPS.

The ARENA is a full 3G phone, running on HSDPA 7.2 networks, and also has built-in Wi-Fi and A-GPS. There’s 8GB of onboard memory, and MicroSD slot which lets you add up to 32GB of additional storage.

Want to see it in action? LG has launched the online ARENA emulator, in case you want to see the device in action. 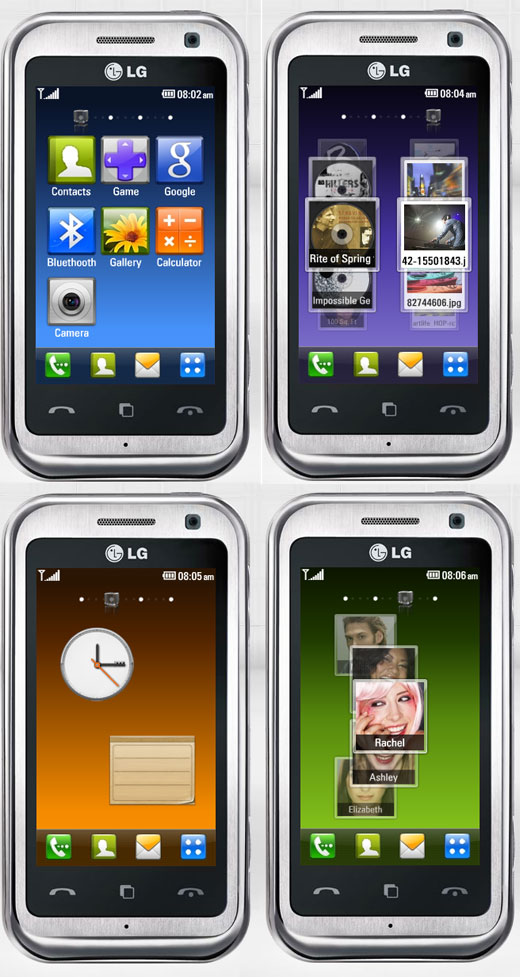 And it packs all of this into a case that measures just 105.9mm x 55.3mm x 11.95mm, smaller than the svelte iPhone 3G. The iPhone might finally have a true challenger. Expect the ARENA to hit Europe this March, then go worldwide later this year.