Nintendo Dsi Goes Black and Blue in Us This April

The next generation Nintendo handheld, the DSi, debuted in Japan last November to robust sales while the rest of the world looked wistfully on, wondering when we, too, could have a chance to take pictures with our game systems without spending $300 to import. At last, Nintendo’s set a date for the world’s other major regions: the first week of April. In the United States, the big day is April 5th. 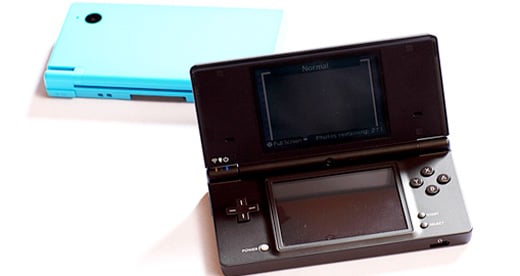 The DSi is actually the third generation of the juggernaut DS, which has already undergone a transformation from a thick unit to a thinner, lighter model with a brighter screen and more battery power. The DSi adds a camera, SD card slot, increased RAM, and an application store similar to Nintendo’s WiiWare and Virtual Console, but at the cost of the handheld’s GBA slot.

In the U.S., the newly-dated DSi will retail for $169.99, which is less than the $179.99 that was previously predicted, in comparison to the DS Lite, which sells for $129.99. At launch, units will be available in black and blue. If you were looking for the white model, you’re out of luck, at least for now–while it will likely be released later, for now, the white DSi has not been announced for the U.S.