Virtual and Literal Periodic Table Are Bursting With Awesomeness. and Elements.

Theodore Gray is one of the founders of technical computing software company Wolfram Research. But we’re not going to talk about that aspect of his life. You see Gray needed a conference table for his office. He was also reading Oliver Sacks’ Uncle Tungsten. In one of the chapters in the book, Sacks mentioned that he loved to visit a periodic table that was on display at the Kensington Museum.

Now here is what separates geniuses from the rest of us: 50 IQ points. What? No. Here is what really separates geniuses from the rest of us: Theodore Gray misunderstood Sacks and thought that Sacks was referring to a table table, as in furniture. When his genius neurons kicked in seconds later and he realized his mistake, Gray also realized that a periodic table table was actually a great idea. See? Even at their dumbest moments they’re intelligent. So with the help of his friends, Theodore Gray – clearly a man possessed by his love for knowledge – built what is undoubtedly one of the geekiest and most useful pieces of furniture in the universe. 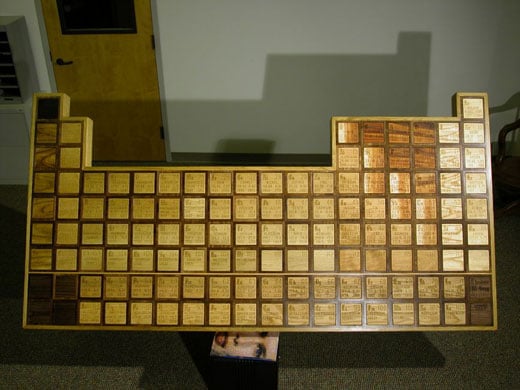 How geeky? Well aside from the fact that it’s a periodic table table dammit, each of the element groups – e.g. alkali metals, noble gases, etc – is represented by a different wood type, “with suitably clever analogies made between wood grain and chemical properties.” I know your nose is bleeding by now but this is just a glimpse of Theodore Gray’s nosebleed inducing awesomeness. Here’s a closer look at the periodic table table: 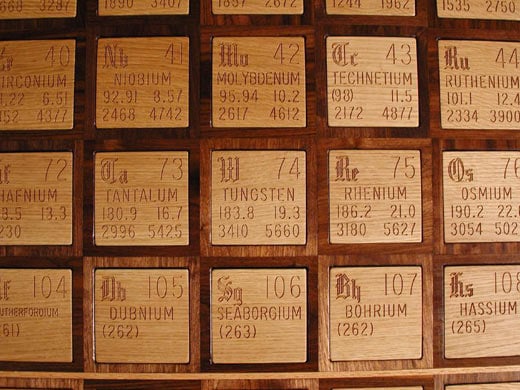 Have a look at another close -up while I stick cotton balls up my nose: 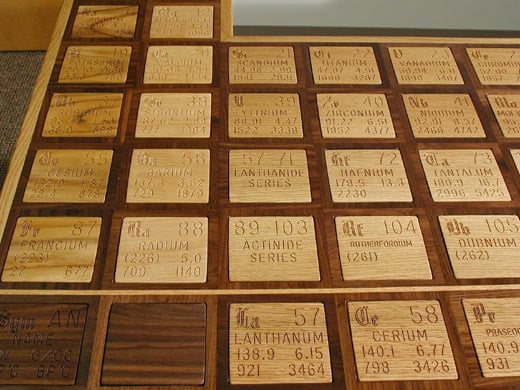 As you might have guessed, each of those tiles are removable. Beneath those tiles are compartments containing actual samples of the corresponding element, although I don’t think he has samples for all the elements yet. “By the way, if you have any depleted Uranium from Afghanistan, I could use it,” says Theodore “Nose Bleedingly Awesome” Gray.

Gray soon found himself building a website to catalog his element samples. Then his awesomeness emanated waves of awesome that simply could not be ignored: In 2002 The Annals of Improbable Research awarded his table the “Ig Nobel Prize”, an accolade given to “scientific work that cannot and should not be reproduced.” 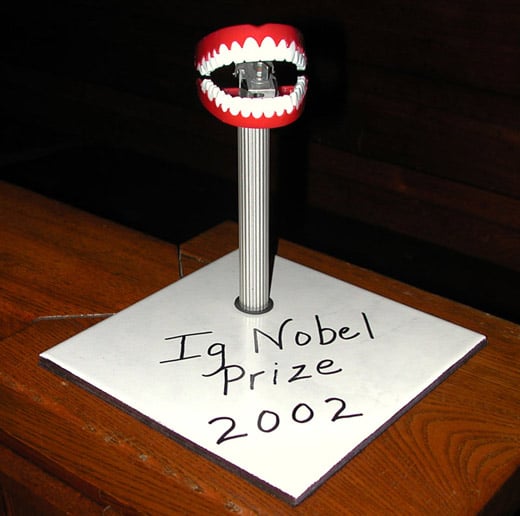 His awesomeness doesn’t end there: Gray realized that he could use his new found popularity to share his knowledge and his love for knowledge, so he kept on improving his website. Now his website “contains the largest, most complete library of stock photographs of the elements and their applications available anywhere, as well as a large and growing collection of 3D images documenting hundreds of samples rotated through 360 degrees.”

Trust me, the amount of knowledge in the website – as well as the approachable and enjoyable manner in which that knowledge is shared – makes periodictable.com the best online reference for budding and even amateur chemists. 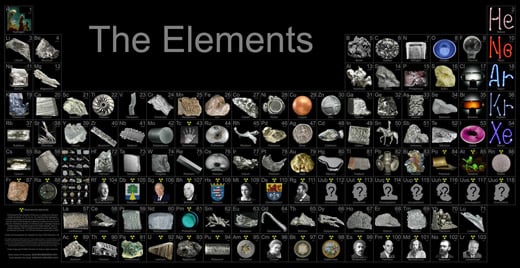 That’s the website’s frontpage. As you can see samples of the elements are shown as well. Clicking an element takes you to a more detailed page for that element: 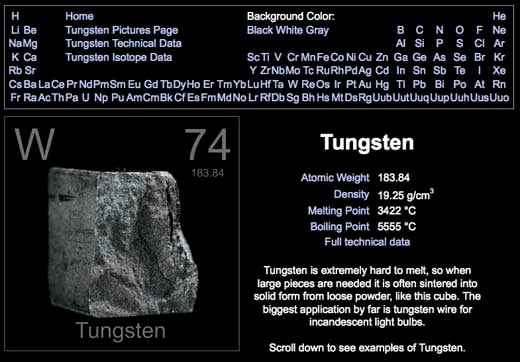 I cannot stress enough the synergy between Gray’s philosophy behind his website and the tone and approach of his entries about the elements. Gray wants to encourage people – the youth in particular – to be curious about their surroundings, to go out and explore nature and to realize that even in our immediate surroundings we can find examples of elements, compounds and other things that we usually think are only present in labs, to be handled only by experts. In short, Gray wants kids to learn by handling stuff and doing all sorts of things with them, instead of being limited to passive and indirect means of acquiring information.

With that in mind, the information on his website is delivered in an approachable and totally non-textbook language. He uses interesting samples and applications as well. Take a look at one of his entries on the applications of Tungsten:

Wouldn’t it be nice if all learning materials reached out to people in this way? Anyway, I’ve said too much; if you love science or literature or art visit his website. Gray is also selling several fun and geeky chemistry kits, such as periodic table posters, place mats, and even a customizable banner, where you type in something and the website generates a banner that spells out what you typed using the symbols for the elements.

You can then order a printed copy of the banner; the price varies according to the size you want to order.

Theodore Gray should receive a Nobel Prize for Making Science (& Furniture) Fun. Him and Professor Beakman.