Is That You Bowie?: Ufo Seen by Entire Siberian City

Can a city full of people be wrong? The residents of Chita in Siberia (population 300,000) claim that at around 6pm last February 15 they saw a giant UFO cross their city at a speed of about 25.2 kph (15.66 mph) and then “disappear over the horizon.” Michael Cohen of all news web says that people in the town center and in the park were all stunned at the sight. These people estimated that the UFO was 500-1,000 meters  (1,640 – 3,280 feet) above ground. Although many of the citizens managed to get a picture of the UFO using their cellphones,  a picture of a moving object that high up would probably be blurry and nearly useless. Here’s one such shot: 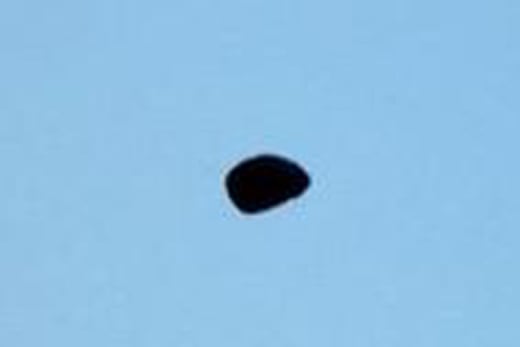 Told you. That picture is a deep reserve of jokes just waiting to be mined. But even without a photo we can’t just dismiss the testimonies of thousands of people. They also said that the UFO emitted no sound or light, and that it was shaped like a “triangle with smoothed edges.”

I say Chuck Norris is hurling mountains at Russia, but that’s just me.