The beta version of Safari 4 is now available for download.  I’m actually using it as I write this post, and while it is quite stable and fast, it’s not going to replace Firefox as my default browser anytime soon. I’ll tell you why later, but if you’re a Firefox user you probably know my reasons. For now let’s take a brief look at the features that Apple are flaunting.

First off is Top Sites, a modified version of Opera’s Speed Dial. Like Speed Dial, Top Sites displays links in the form of previews of websites arranged in a grid; up to 24 previews can be displayed. Top Sites’ advantage over Speed Dial is that it tells you if any of the previewed websites have been updated by displaying a blue star on the upper right corner of the websites’ preview. 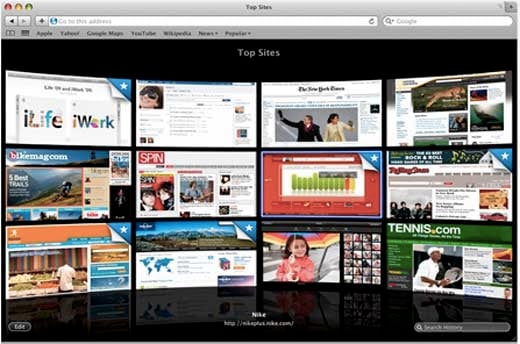 You can also “pin” a website to it’s current position so you’ll always know where to look for it. As cool as it looks, for me Top Sites needs to be tweaked: you can remove websites from the grid at anytime, but for some reason you can’t manually add websites like in Speed Dial.

Top Sites has to “learn” which websites you frequently visit. Bookmarks are enough for me, but since my 6-year old niece also uses my Mac to surf the net, it would have been nice if I could just click on existing previews and replace them by typing in the URL of the websites that she likes so she doesn’t have to do the typing.

Safari did not escape Apple’s Cover Flow mania, although this time it’s actually quite useful because it’s used to scan not only through your bookmarks but through your browsing history as well. It’s a great way to look up the tab of any obscure blog or website that you accidentally closed, and you can look at a page without having to load it again. 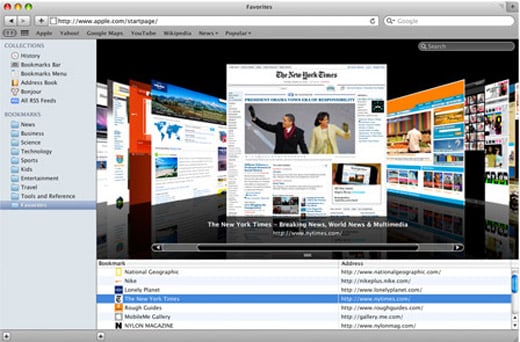 Safari 4’s Full History Search can even recognize captions, so for instance if you’re looking for a certain picture but you don’t want to flip through hundreds of previews, you can type in the picture’s caption and Safari will look for the page for you.

The next feature is immediately noticeable as soon as you open a new tab: Chrome’s tab-on-top look has rubbed off on Safari. You can snicker all you want, but the set-up really makes sense and makes you wonder why the developers of Firefox didn’t think of it before anyone else. 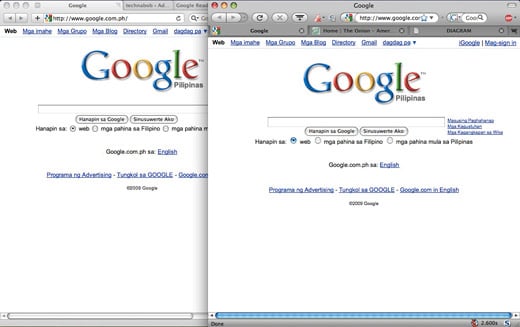 As you can see, having the tabs on top of the browser is less distracting, and it also frees up a significant amount of viewing space. Hackintosh Netbook owners will certainly thank Apple for that extra space. But like Top Sites, in my opinion this new (for Safari) feature still needs to improved.

You see, by moving the tabs to the top of the window, they also become the area that you drag to move the entire window. This quickly becomes annoying because whereas in Firefox you can click anywhere on a tab to drag and drop it to a new location, in Safari you have to click at the tab’s “handle”  – the tiny triangle on the right side edge of a tab – before you can drag and drop the tab. If you click anywhere else you’ll just end up moving the whole window, which is what happens when you click the “forehead” of any window, whether in OS X or in Windows. 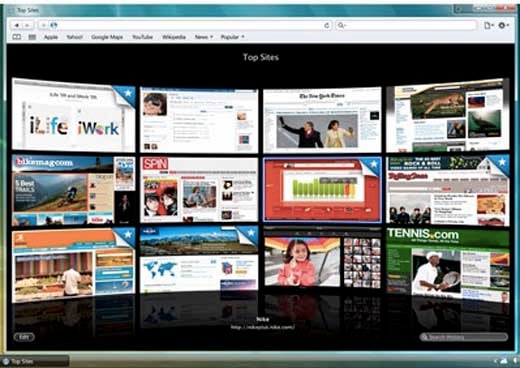 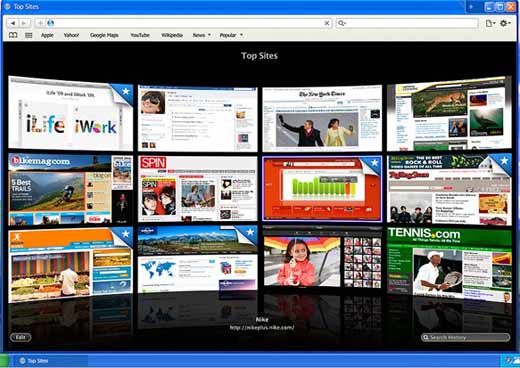 Personally I didn’t notice any significant difference between the load times of sites in Firefox 3 and in Safari 4. But Safari 4 is fast and really stable for a beta. Okay so it’s not really stable, but it’s stable. I actually had to switch to Firefox to finish this article, because when I clicked the “insert hyperlink” button on WordPress, Safari rendered the pop up window (where the url is typed in) behind the black veil that also pops up when you click the button. The black veil blocks input to everything else except to the pop up window, but since Safari put the pop up window behind the veil as well, I couldn’t enter the hyperlink and I got stuck with the stupid veil. Hooray for auto save. So is Safari 4 beta good enough to be a default browser? I say try it out yourselves. You can download Safari 4 beta here.

But even if Apple manages to fix the things I complained about, I’m still not going to use the final version of Safari 4 as my default browser. Why? No add-ons. Apple still has time to fix Top Sites and the tab dragging, but without things like Noscript, Flashblock, Adblock Plus, Download Statusbar, Better GReader, Better Youtube – I could go on and on –  I’ll always think of Safari as a backup browser. IE, on the other hand, should only be used once: on fresh installs, to download Firefox.