Nowadays, beta males are considered cool guys. There’s Chuck. There’s Leonard and Sheldon. There’s Justin Long in Die Hard 4.0. There’s Dwight Schrute. Okay maybe not Dwight. But you get it right? And when something is marketed as cool, you can bet your neighbor’s family that the media and the market will milk the living crap out of that thing. Take the Ultimate Pocket Protector: 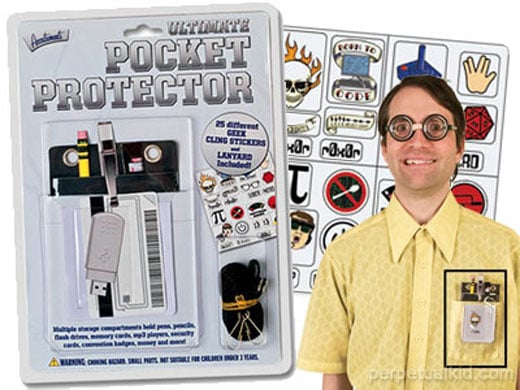 Look at that ad. Who the hell would want to look like that? Yet that is the ultimate purpose of the ultimate pocket protector.It proclaims that the wearer is a geek in the same way that a black shirt with the “Anarchy” sign on it proclaims that the wearer likes punk music. Or anarchy. Sure, the pocket protector has isn’t altogether useless because it has compartments for pens, pencils, and even mp3 players and flash disks. But come on, everyone has mp3 players and flash disks nowadays. Then you have the stickers. A sticker for π or a d12 is still kind of cool, but “r0x0r”? “uber nerd”? This “geekwear” caters to people who want to become stereotypes. How dumb is that.

Bottomline: if you want your kid to get 6.0221415 × 1023 noogies and wedgies a day, then go ahead, buy the Ultimate Pocket Protector at Discover This for $5.49 USD. Lifetime of shame and embarrassment included.