The Dark Ops Wii Light Gun seems to have been designed with two kinds of people in mind: a) the kind of people who want to play every Wii game with a gun (i.e. the people I didn’t know existed) and b) people who want to inject some sort of action-movie-style flair into their Wii gaming. 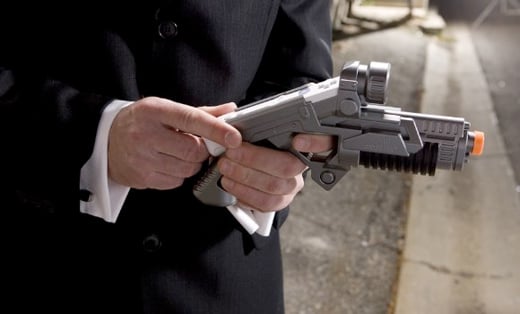 Here’s who didn’t design the Dark Ops Wii Light Gun: people who design guns. Certainly this gun shell is neat-looking and stands out even in the crowded field of retail and DIY Wii controller shells, but it doesn’t look nearly as realistic as as the gritty action film marketing is trying to imply.

Also, reaching the D-pad with this thing has got to be a major pain in the thumb area. This gun was clearly made for a race of man with more, and longer, digits than those of the modern human, but at least it’s not the same boring white plastic found in most other Wii guns.