We’ve seen people put old Nintendo systems into all kinds of things, but I’m pretty sure this is the first time I’ve seen a Super Nintendo inside a toaster. I guess you just can’t deny that cartridges and slices of bread aren’t completely dissimilar. 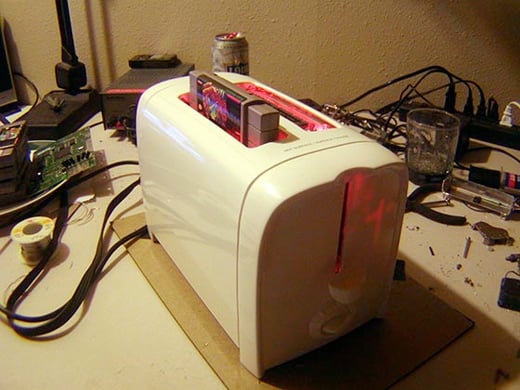 Yep, it’s a working SNES in a stark white toaster enlivened with a red glow. The Super Nintoaster comes from the BenHeck.com forums, home of dozens of spectacular modders. vomitsaw, builder of the Super Nintoaster, has apparently tread this ground before; this effort was inspired by an older project, which involved–as you may have guessed–putting an NES into a toaster.

I like it, but call me when it can play my games and make my toast. According to this hilarious video, the Super Nintoaster cannot. Weak.