Zeebo, “the Fourth Big Console” to be Released in Brazil This July (Boa Sorte!)

At the ongoing Game Developers Conference in California, Zeebo Inc. unveiled the Zeebo, a video game console for people in the “middle class” of developing countries. The Zeebo will initially be offered in Brazil this July via a partnership with Brazilian manufacturer Tectoy. Zeebo Inc. plans to make the console available in Mexico and the rest of Latin America, as well as in India and China in the near future.

Zeebo Inc. is taking advantage of the fact that current video game consoles are too expensive for majority of the people in developing countries. Brandon Sheffield of Gamasutra says, “In Brazil… a PS3 costs the equivalent of US$1,100 new, and the Wii costs US$1,000, because neither console has officially launched there — the only alternative for those consoles is piracy.” The Zeebo on the other hand will have a launch price equivalent to a mere $199 USD, and its games will sell for about $5 USD to $15 USD. 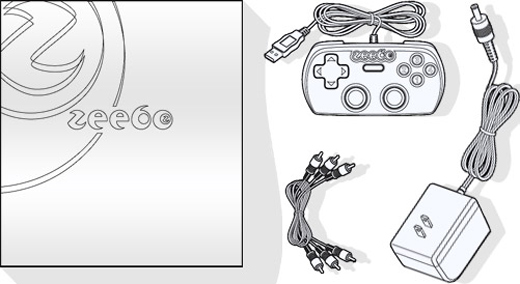 Obviously a lower-priced console will have lower specs as well: the Zeebo’s ARM 11 CPU clocks in at 528 Mhz, supported by 128 MB of RAM and a Qualcomm Adreno GPU. For comparison’s sake, Nintendo’s Wii – the “weakest” current gen console – has a 729 Mhz CPU, 88 Mb of RAM and a 243 Mhz ATI GPU.

But we also know that a powerful console doesn’t guarantee success: the Wii is number one in terms of worldwide sales, and the supposedly future-proof PlayStation 3 is barely surviving the present. Zeebo Inc. wants to pull off a Nintendo-like performance with their console, so along with the very attractive price tag, they’ve partnered with major video game publishers and developers like EA, Activision, Capcom, THQ and Popcap to ensure that the Zeebo will have quality games.

Double Dragon ftw! The Zeebo will come with three free games stored in its 1 GB NAND flash memory, and additional games can be purchased wirelessly. But because the Zeebo is aimed at poor folks like me, instead of requiring users to have an expensive broadband connection the Zeebo will make use of existing 3G networks to connect to the online market, known as ZeeboNet.

As you can see ZeeboNet will work like Xbox Live, where customers can top up their accounts and purchase games priced in “Z-credits”. The prepaid digital distribution system will serve as protection against piracy, which is so rampant in Third World countries that it has discouraged video game companies from marketing or localizing their products in such areas. For example, I have a PS3 (got it for free) but when I created my PlayStation account I found out that the Philippines wasn’t on the list of countries supported, so I picked Hong Kong. My address is “1, Aberdeen, Hong Kong.” Where’s the love Sony? 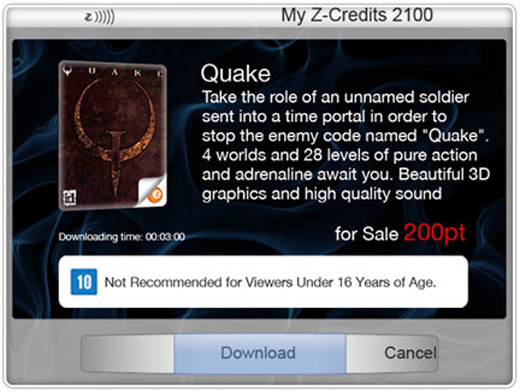 If all goes as planned the Zeebo will give its users lots and lots of localization love. John Rizzo, CEO of Zeebo Inc. says, “We work with developers in the local countries; I could imagine a Bollywood dance game with a dance pad. That would be fantastic in India, much more sale-able than Prey. Or in China, a game that teaches English as a second language would be really cool and powerful for that market.” 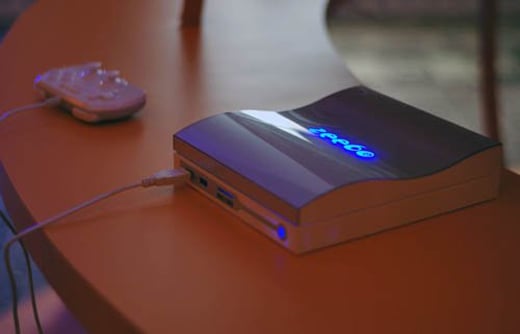 For more details you can check out Gamasutra’s articles on Zeebo as well as the console’s official site. I hope the Zeebo becomes successful, if only to convince good game developers and publishers to make low-priced quality games. I think Zeebo Inc. is really looking after it’s target audience: aside from offering cheap consoles and games, the company claims that Zeebo only consumes 1 watt of power. 1 watt! I mean, Light bulbs consume at least 5 watts, and they don’t even play games! Light bulbs suck.

In the end I think the Zeebo’s success will depend on a healthy library of video games and Zeebo Inc.’s respect of the ownership of users’ digital purchases. I’m also a bit concerned about the console’s reliance on 3G networks because it relies on signal strength and the number of users on a given location; here in the Philippines cellular phone networks are brought to their knees on holidays because of the sheer volume of text messages and calls. Let’s hope that today’s 3G networks can withstand the force of millions of Zeebos.

So Brazil, prepare to be blown away by Tekken 2. And just you wait for Tekken 3! I don’t know if you’ll like Eddy Gordo though.