Italian pizzerias are outraged at the Let’s Pizza vending machine, due to be released in Italy this summer. Let’s Pizza apparently does to pizza what Nissin did to noodles: make it possible to enjoy one in 3 minutes. The machine doesn’t just heat frozen pizza; it actually serves freshly-made pizza. And at €3.50 ($4.76 USD), it’s also half the price of old-fashioned restaurant pizza. The kicker? It was invented by an Italian. Ouch.

Inventor Claudio Torghele (not sure if he’s the guy in the pic) says that he got the idea ten years ago while he was working in – drum roll please – the United States, in California to be precise: “At food courts I saw a trend toward vending machines.” I’m wondering why he didn’t choose to put up the machines in the US rather than earning the ire of his countrymen. 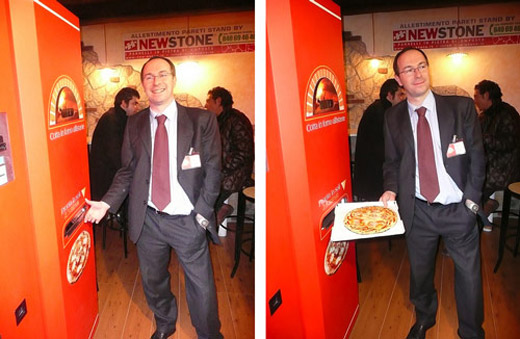 Let’s Pizza offers four kinds of toppings: tomato and cheese, vegetables, ham, and bacon. After a topping is selected, the machine mixes flour and water into a drum. The drum spins to form a lump of dough that is then pressed to form a 12-inch disk. A squirt of tomato here, a sprinkle of cheese there, some… other stuff, and then it’s baked in an infrared oven. The finished product is then placed into a cardboard tray. 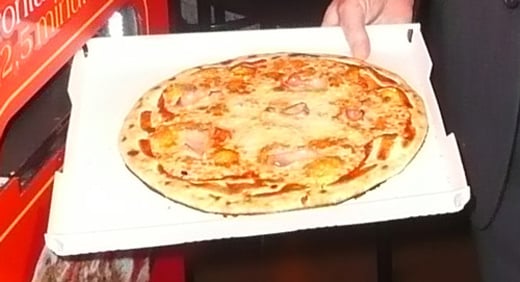 Pino Morelli, head of the Association of Italian Pizzerias, is insulted that such a device will soon co-exist with local pizzerias:  “It might be alright for McDonalds and other fast-food chains or for foreign markets like the US, China and India but anyone wanting to eat a real pizza has to go to a traditional pizzeria.” He’s not pissed off because there’s a new competitor in town – and I also think that fast food has a long way to go before it can be as delicious as restaurant/homemade food – he’s concerned that the machine might give pizza and Italy a bad name: “The pizza is the symbol of the ‘Made in Italy’ brand and we should let it live and prosper in peace.”

Would you buy instant pizza? Or will you let pizzas live and prosper in peace? Before reading this article were you aware that pizzas are alive?

[via Times Online and Slice]