Filmmaker Rob Spence lost his eye when he was 11 years old. He was playing with a shotgun back in his grandfather’s farm in Ireland when it backfired. Now he and his partners in the Eyeborg Project want to “transform his loss into a superhuman strength” for art’s sake. Spence wants to install a video camera into a prosthetic eye so he could “explore privacy and surveillance issues.” 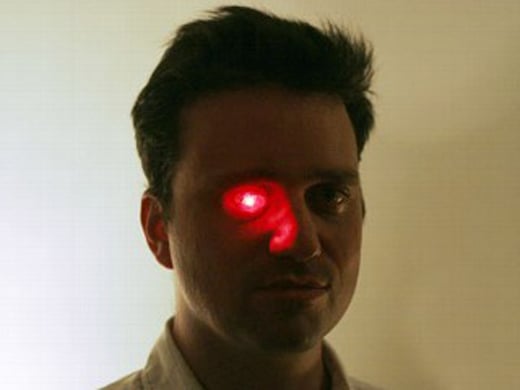 Whatever his cause, Spence and his partners sure know how to gain mad publicity. By installing a red LED into his prosthetic eye, they not only proved that installing an electronic device and its power source into such a small space is feasible, now Spence also looks like one of the Borg, or a Terminator. He says that “this is every adult male’s fantasy.” To which I would have to say “Ummm…no.” But he really does look awesome.

The Canadian’s quest for a camera-eye has been widely publicized; however, the Eyeborg Project really don’t have much to show save for a prototype housing for the camera. This video from the Eyeborg Project introduces us to the people behind the team. It’s actually pretty crazy and funny; but of course we should expect nothing less from a guy who decides to pop in an LED into his eye socket.

Although personally I’m okay with my plain old unenhanced eyes, I really hope the project succeeds. You never know, someday blind people may have the option to install tiny video cameras into their bodies and have it wired to their brains so they can “see”. For more details – including an Ashton Kutcher tweet – check out the Eyeborg Project’s website and their blog.