The people behind Scarpar wanted to “extend the snowboard season” which they say is quite brief in Australia. Some say that the skateboard was made so that surfers could still surf even if waves were flat. Will Scarpar be the next step in boarding? 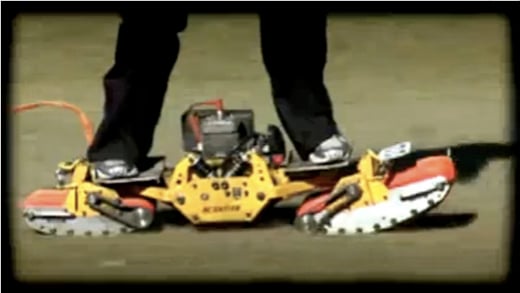 The Scarpar runs on two tracks and is powered by a four stroke engine. The board that you see above and in the video below is a prototype, so expect the design to change when – and if – the product is released. Braking and acceleration are controlled by hand. I’m no engineer but I think that’s where things might go horribly wrong. Skis, surfboards and skateboards are more or less directly controlled by our bodies; for a board that can go as fast as 35 mph (60 kph), a controller malfunction – or mistakenly activating accelerate instead of brake – will probably lead to some serious injuries. Unless of course the controls are intuitive; like grip the controller tight to accelerate and relax to brake.

Scarpar Pty Ltd originally planned on releasing their board this year, but due to financial constraints – in their words:”Blame Wall Street!” – they had to move the release date to 2010. While I’m content with watching other people perform extreme sports, I think the efforts of the people behind Scarpar will lead to more user-friendly all-terrain pedestrian transports. So to all inventors and engineers out there: these guys are onto something! Forget the Segway, work on the Scarpar!