Someone – I forgot who – once said that politics is “showbiz for ugly people.” Well the United States of America beg to differ, as they now have a leader whose charms are so far above Hollywood levels that he makes betting on the NCAA Final Four absolutely bewitching, even to yours truly, a Filipino who doesn’t even care about basketball in general.  The American media goes crazy when his family gets a dog, or when his wife manages to change her clothes inside a gigantic airplane. How indeed did she pull that off? 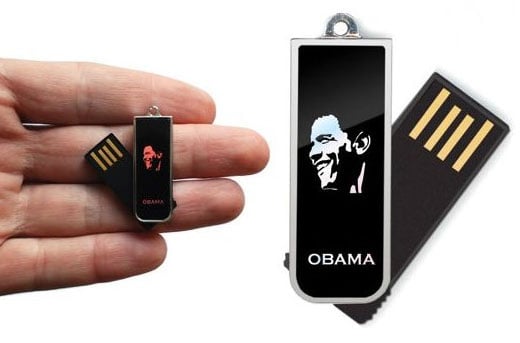 Since we can’t get enough of combining President Obama with everything except things actually related to his job, let’s all buy this Obama flash drive from Active Media Products. The 2 GB USB drive features a holographic image of the 44th American President and an hour’s worth of speeches – his Inaugural Address and “Race Speech” –  in mp3 format.

You can get the Obama flash drive at Amazon