Sometimes, when you really love a series, there’s nothing you won’t do to promote your fandom, even down to plastering the very shoes on your feet with the franchise’s iconography. When that franchise also happens to be about attorneys and people with crazy names, this is the result: 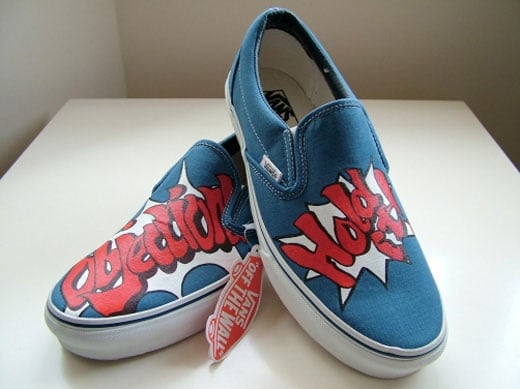 Objection! I don’t have any shoes that are nearly that cool. Thanks to the step-by-step report posted by creator Tonks, though, I could make my own… if only I had any of that pesky artistic talent. Maybe that’s available on eBay? If not, well, at least these shoes are.

The Ace Attorney series is a cult favorite, and Phoenix Wright’s pointing finger has shown up in all sorts of places along with his Hold it!s. With the franchise expanding now to include prosecutor Miles Edgeworth, who will be starring in his own games, it will be interesting to see where this goes with the DIY crowd in the future.