Oh crap. I knew it. Those stupid robots at SparkFun’s race were publicized to lull us all into a false sense of security: “Wow it just went for a dive at the lake HAHA st00pid botz.” Yet now we have cyborg beetles. CyBORG beetles people.

Developed by a team of DARPA-funded engineers – led by Michael Maharbiz – at the University of Skynet California at Berkeley, the beetle Borg is assimilated at its pupal stage; as the beetle matures, the “neural electrodes” implanted into its nervous and muscular systems become one with its body. Awesome. I meant poor beetle. tsk tsk tsk. 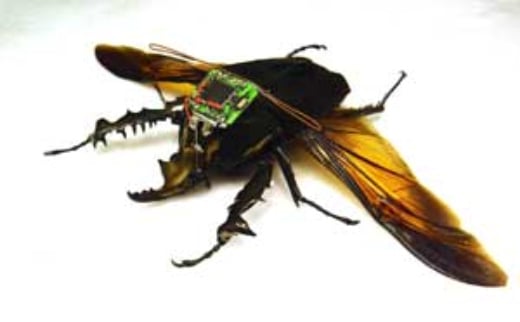 A microcontroller and microbattery are then mounted on the adult beetle, allowing that disembodied hand controlling that laptop in the image below to control the movement of the beetle, as in “initiation, cessation, elevation and left/right turns of the beetle flight.” Note to self: Possible weakness: beetle cannot be told to go backwards. Must tweet this to the Resistance. 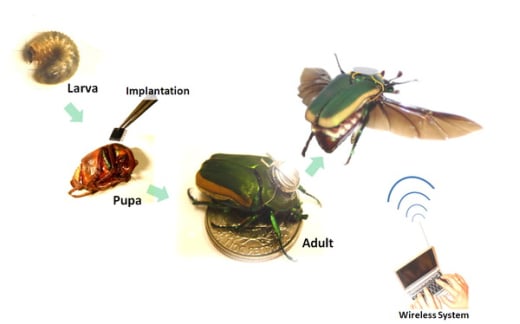 Insects are already capable of awesome things despite their size. For example, the beetle is strong enough to carry a “small payload”, such as a camera or a tiny tiny nuke, perhaps strong enough to cause an outbreak of zits at Ground Zero. Okay that last one was my idea. Still scary though.

The UC team are planning on working on more cyborg insects, such as cyborg butterflies for long-distance missions, cyborg dragonflies for high-speed missions, cyborg moths with a 10-inch wingspan for carrying cargo, and cyborg grasshoppas for awesome Kung-Fu lessons. I made that last one up but you never know. You never know.