The Port of Yokohama in Japan is celebrating its 150th anniversary this year, and what better way to celebrate the opening of a port than with a couple of giant robot spiders from France? 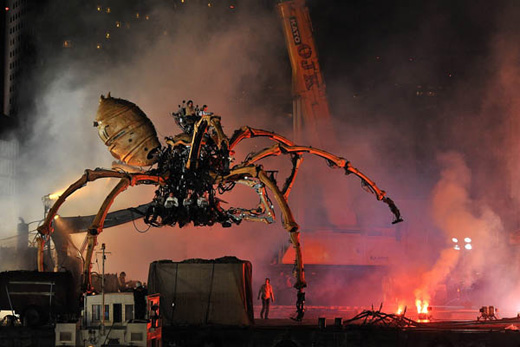 The theater group La Machine terrorized performed at the Yokohama Bayside Area, bringing with them their 40 ft tall, 37-ton giant robot spiders. Finally, something weird and robotic that’s not from Japan.

As you saw from the video, the spiders can move their legs but are really anchored to a crane. They also spout water from their mouth and butt. Yech. The robots are operated by 13 of the luckiest people in the world, people who get to control and ride on giant robot spiders. But La Machine’s performance isn’t limited to the robots alone; the production includes live music as well as fireworks. You can check out La Machine’s gallery for more pics; The Boston Globe also has some amazing pictures from La Machine’s performance in Liverpool, England last year courtesy of photographer Peter Carr.