Panasonic demoed their own robot floor cleaner at the Tokyo Fiber Senseware exhibition in Milan. It’s called the “fukitorimushi” (wipe-up bug), although if you ask me “Creepy Pillow” would be a better name for it. The high-tech pillow cleaner detects dust and dirt using “blue-white light” and then cleans ’em up using a cutting-edge nanocloth developed by Teijin Ltd. 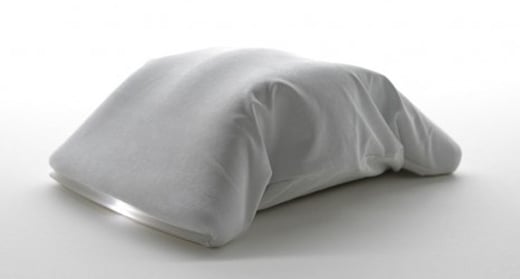 According to Chris Davies of Slash Gear, the nanocloth is made of “thousands of polyester filament fibers each 7,500x thinner than a human hair.” When it spots dirt, fukitorimushi’s “eyes” will flash red, and the robot will furiously crawl all over the place until its target is eliminated.

Like the more colorful and less creepy Roomba, Fukitorimushi can also dock itself into its charging station when it needs to recharge, but it still needs some TLC from its owners because the nanocloth will have to be replaced once in a while. Which is why Panasonic says that the owners of a fukitorimushi will gain more than a cleaner but also a pet. The Roomba, on the other hand, becomes a source of amusement if its owners already have a pet.