Ace the Robot Does What Male Drivers Won’T: Ask for Directions

Martin Buss and his team at the Technical University of Munich created a robot that relies on help from humans to get to its destination. The robot is called Autonomous City Explorer or ACE, and while it looks really ugly, it’s one of the first robots that’s proven successful in a real world setting, as opposed to lab tests or simulations. 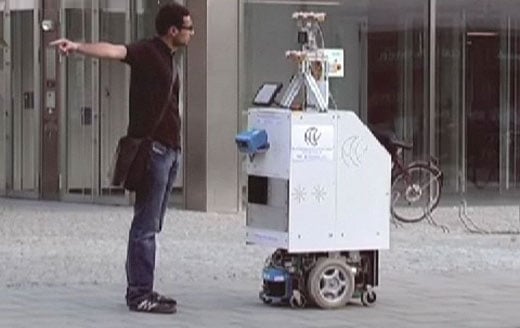 Buss and his team dropped ACE outside of their university and instructed it to go to the Marienplatz, which is 1.5 kilometers (0.93 mi) away from the school. ACE’s problem? It didn’t know how to get there, and it had no digital map or GPS. So ACE had to ask the people it came across for directions.

ACE can detect nearby humans using cameras as well as motion- and posture detecting software. ACE also has a touchscreen for a head, and another screen with an animated mouth. Once it finds a human, ACE calls out using its built-in speaker and asks the person to touch its screen if he’s willing to help. ACE will then ask the good Samaritan to point its body in the right direction. ACE will then be on its way, but not before saying “thank you” to the fleshy construct who helped it.

After 5 hours, ACE reached its destination. In its defense, Buss’ team said that ACE became too popular for his own good, and was slowed down when it crossed a busy pedestrian zone, where 21 passersby stopped to talk to the defenseless robot. As expected, ACE also received wrong directions, but fortunately it only happened once. While ACE still needs to be equipped with a bullshit detector, roboticist Paul Newman of the University of Oxford in the UK was impressed by the German experiment, specially because the robot adapts to how humans process and share information instead of the other way around.