Air-Trekkers Jumping Stilts: Unleash the Tigger in You

Ever wondered if there was a way to turn any surface into a trampoline? Me neither. But there is an answer to that non-existent question that doesn’t involve taking illegal substances: wear Air-Trekkers. They’re 3-foot long jumping stilts with an aluminum frame & carbon-fiber springs. Just put them on, and, as they say, the world is your trampoline. 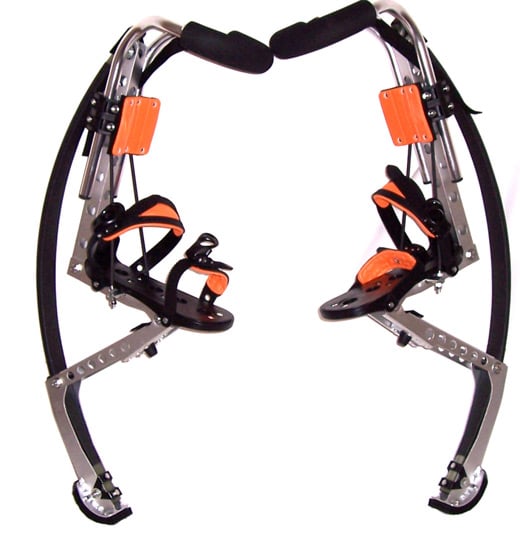 The company – also named Air Trekkers – who makes these tiggerrific contraptions don’t want people to think of their product as a “toy”, probably for fear that kids might underestimate the risks involved in wearing air-trekkers. So I’m going to call it a humorous mode of transport.

But with great jumping power comes great price: the “Adult” Air-Trekkers sell for $270 USD, the “Pro-Cuff” version sells for $370 USD, and the “Extreme” Air-Trekkers sell for $390 USD. What’s more, their product pages are very subjectively written and fail to explain how exactly the three versions differ. Of course the company says that the extremely expensive Extreme Air-Trekkers are the best stilts. Which kind of makes you wonder why they even make the inferior versions. Jump to Air-Trekkers’ website to order. Or just buy a PS3. Sony could use the money.