Welcome to another edition of Cute or Stupid?, where we examine stuff and mull over their existence, whether they are useless but cute or just plain useless and therefore stupid. Today we have Perfect Petzzz, “life like” puppies and kittens that do nothing but sleep. And they’re battery-powered. 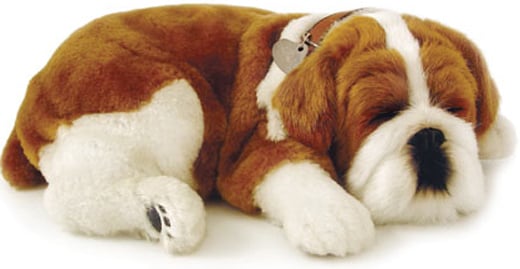 Perhaps you’re wondering: what’s the battery for, to power its dreams?  I did. But no. The battery powers the Petzzz’ belly, so that it will rise and fall like the belly of a real sleeping pet. I kid you not. If you don’t believe me you can check out the intense breathing action on Perfect Petzzz’ website. But before we totally give up on this seemingly rip-off of a product, let it be known that the petzzz apparently have numerous fans, and their testimonials on the Perfect Petzzz website give the toys a whole new dimension. 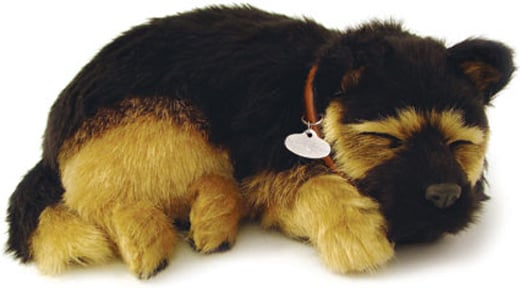 Some commenters said that Perfect Petzzz really look like the real thing. One parent wrote that her child got over the death of their real dog with the help of a petzzz, while another said that their child grew to love real pets because of the narcoleptic toy. But not all of the reviews were good. A lot of people were pissed that the thing couldn’t be turned off; it just lay there, curled up, adorably wasting battery. Some were disappointed because the petzzz “just sits there”. 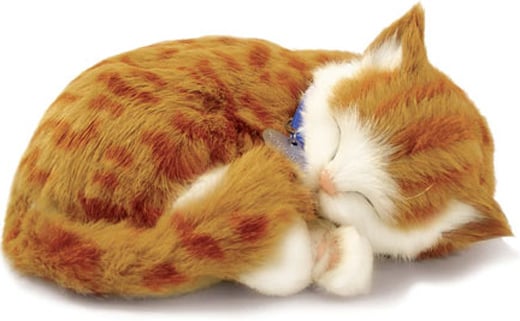 As a busy pet owner, the prospect of owning a “pet” that doesn’t poop or pee, or bark at every random freaking thing that it decides is worth barking at is mildly enticing. But I think I’ll stick with my stupid, noisy, constantly excreting, living dog. Although it would be nice if I could put him to sleep simply by feeding him a battery.

I guess we’ll end today’s Cute or Stupid without having reached a consensus, but if you disagree with me and you just want to know where you can get your own petzzz, go to Perfect Petzzz’ website and be ready to pay $40 USD per petzzzz. There are a variety of “breeds” to choose from.