There must be a lot of Google employees who like to use their phones while they’re driving. The company is currently working on an “eyes-free” interface for their Android software that utilizes tactile and aural feedback together with a new way of navigating phone menus that will allow users to operate their phones using just one hand, and without even having to look at their phone’s screen. Adding aural feedback may be enough for phones with conventional keypads, but the recent obsession with touchscreens necessitates tactile feedback and a new interface. 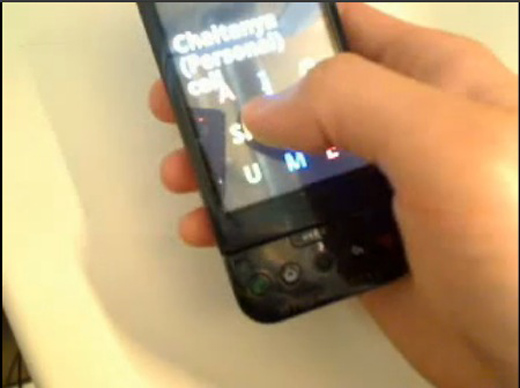 The demo video shows how the new interface allows for eyes-free browsing of contacts. The most important part of the setup is the square of 8 letters/symbols that appears as soon as you touch the screen. The square is centered on your finger, so any of the 8 surrounding alphabets is just a swipe away. Swiping to a letter causes the phone to vibrate, indicating that you have reached a letter.

As soon as you swipe to a letter, a new set of 7 letters/symbols fills the rest of the square. According to Google, this ensures that all letters/symbols are at most only 3 swipes away. You then raise your finger off the screen upon reaching the desired letter/symbol to select it. A voice prompt announces the letter/symbol you have selected, after which the phone searches your contacts and goes to the first name that starts with the selected letter/symbol.

It doesn’t sound extremely complicated, but if ever it’s implemented into future phones, it will surely take users quite a while to learn and adjust to the interface. Read the full article for Google’s other planned eyes-free features, such as gesture-based commands. I’m curious to know how much impact such an interface would have on the battery life of phones.