Giant Remote Controlled Rms Titanic: Hopefully There Are No Tiny Icebergs Around

First we had the watch, and now we have a model. The 6-foot long remote-controlled RMS Titanic is a faithfully reproduced 1:150 scale model. It took 400 man-hours (that’s about 1600 dog-hours, or 879,592 mosquito-hours) to assemble. It has over 300 handmade parts, which include the fiberglass hull, stained white maple planks, and mahogany parts for the ship’s superstructure. The rest of the ship is made of injection-molded plastic. 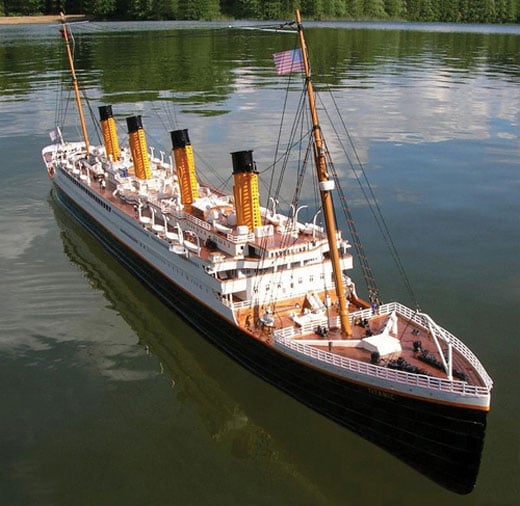 It has three propellers that are powered by three 550-watt motors, giving the ship a cruising speed of 5 mph on “calm water”. On rough, icy seas, it will dramatically sink, whilst a recorded orchestra plays. Kidding. The ship has two rechargeable batteries that lasts up to 3 hours between charges. I don’t know where all the Titanic love is coming from, but one thing’s for sure: Titanic love ain’t messin’ with no broke fellas. It sells for $2,500 USD at Hammacher Schlemmer.